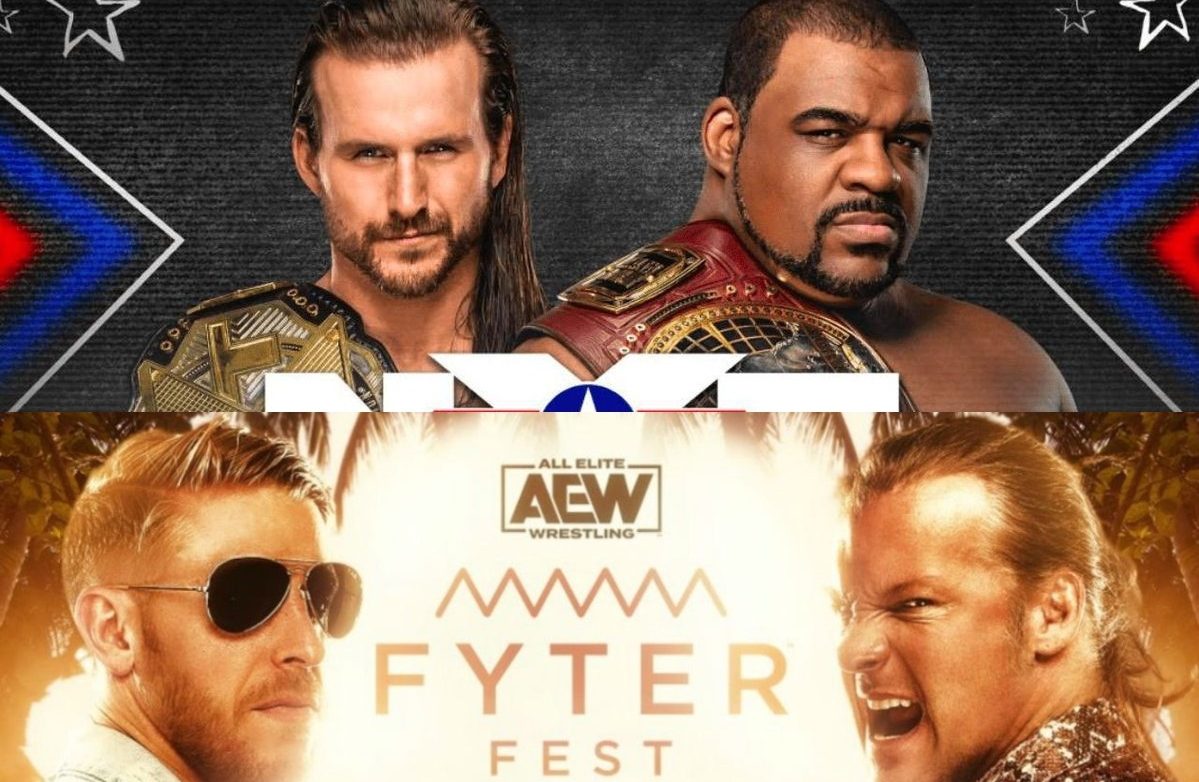 SHAWN PUFF: So it’s another Sean & Shawn Show, except this time they booked us against each other. Was up wit dat? Oh well, it’s The Great American Bash v Fyter Fest. It’s NXT v AEW. It’s USA v TNT. It’s Sean v Shawn. My only question is how did I get stuck with the Puppy Battle Royal? The Puppy Battle Royal. Just another way for the Elite to book themselves to go over.

SEAN FARRELL: Why did you get stuck with the Puppy Bowl? Because, after l covered Night One of Fyter Fest last week, I realized I could cover the Two Titans Tussling for All the Gold on NXT’s GAB Night 2, or The Puppy Bowl. It was truly a gut-wrenching decision. Onto the Counter Programming Summer Spectacular! 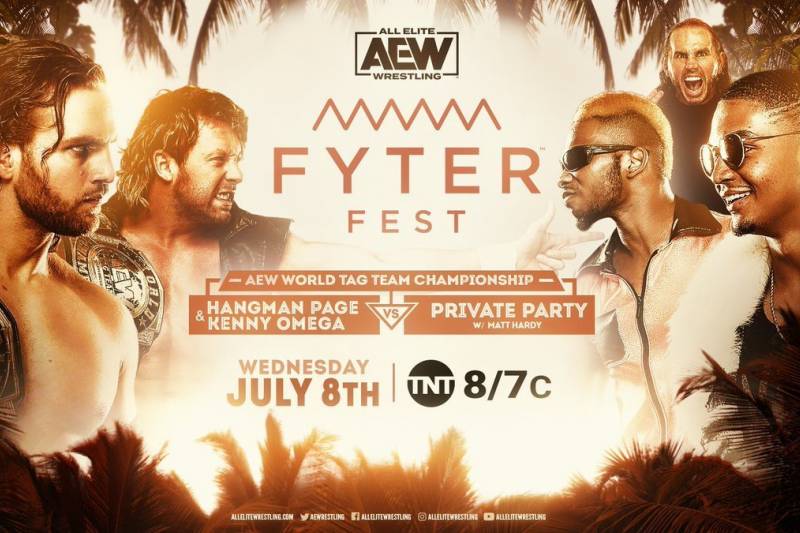 SHAWN: Fyter Fest Night Two opened with the AEW Tag Team Titles on the line and Private Party getting their shot at Hangman Page and Kenny Omega. In the land of many great tag teams, we have a thrown together team with a long title run. I’m just waiting for them to pull the trigger on this long burn breakup angle. It’s definitely not happening tonight. Oh well. This was a really fun match to start out the show. Spot monkeys & superkicks. Two of my favorite things. – 3.5/5 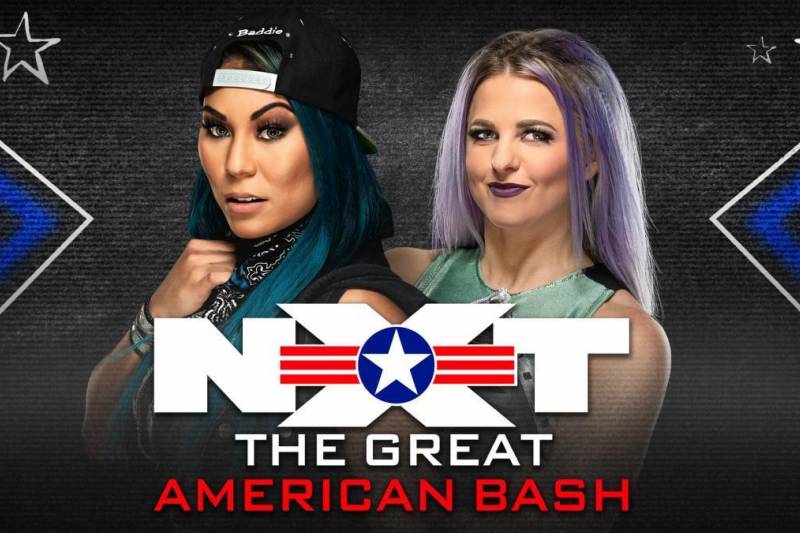 SEAN: GAB Night two Starts off with a Cat-Fig– No! It’s a Street Fight! Chairs, Kendo Sticks, Ladders, Trash cans & Wrestling Holds! A decent mix of wrestling and plunder from these two in the only second Women’s Street Fight in NXT history as the Gargano/Lee Family Feud Continues! The Poisoned Pixy took a nasty bump through a table. When it looked like the ol’ Willaim Regal Power of the Punch was about to get the job done, Candice Leslay retaliated with a wicked swinging neck breaker from a turnbuckled table onto a sea of chairs, giving her a much-needed win. They even sold the carnage after the match as Mr. Wrestling collected his bride from the ring, but Mia Yim showed that this is far from over! – 3/5 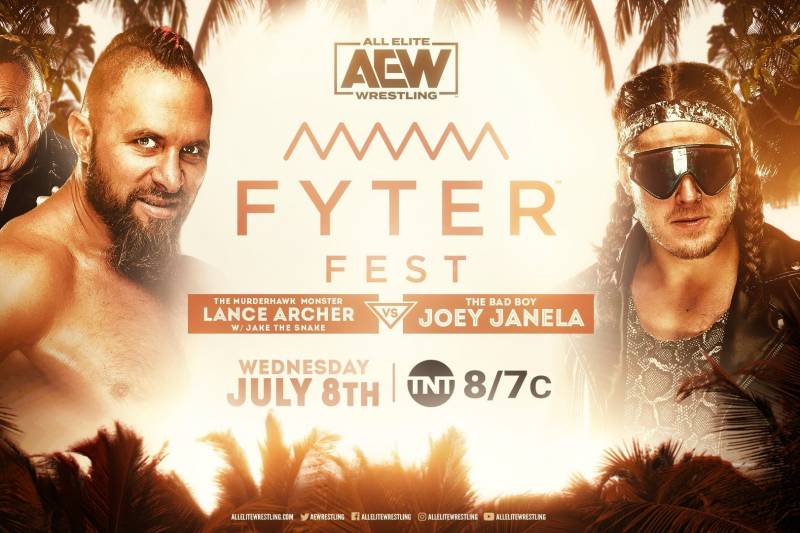 SHAWN: Next, over on TNT, we had Joey Janela one on one with The Murderhawk Monster, Lance Archer. Archer showed up carrying Sonny Kiss on his shoulders and tossed him onto his tag team partner. Archer just doesn’t seem to care if he wins or loses. He just hurts people. I mean, he wins too, but it doesn’t seem like it’s his goal. This one was a little bit too competitive for my liking. I like my Murderhawk Monster squashing the competition. Sidebar: I’m pretty sure there isn’t a damn snake in that bag that Jake carries around. Holy shit!!! That Blackout from the apron through a table outside of the ring!!! Ouch. – 2.25/5 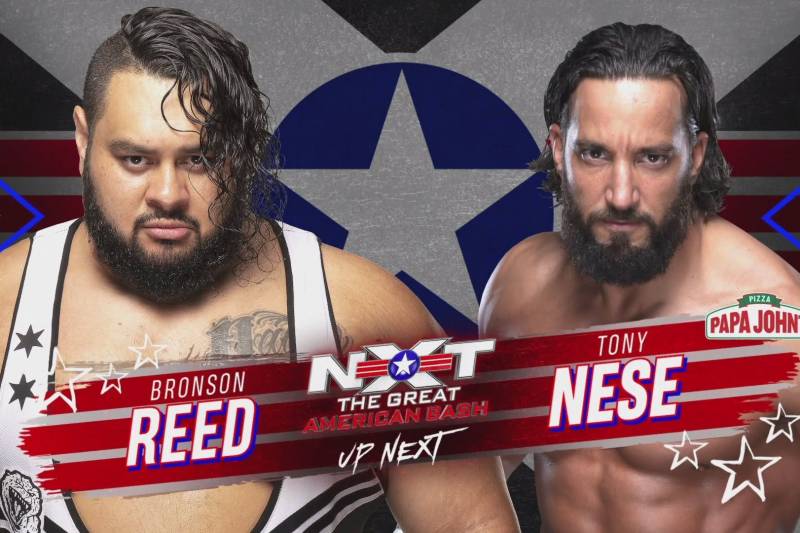 SEAN: The Thic Boi has beef with Mr. Abs because Tony doesn’t wrestle…with…honor! Man, what is it with smaller wrestlers thinking they’re giants in the ring and intellectually? This match sorta is cold, booking wise, but in the ring, these two know what they’re doing. Nese uses his speed, Reed uses his size. However, Bronson Reed is damn near as fast as Tony, and moves like a man ⅓ his size! Reed with his Thicc Ass Top Rope Splash put Tony Nese down for the 1-2-3. – 2/5

So Robert Stone tries to sign Shotzi Blackheart, gets rejected, mauled by Killian Dane then ran over by Shotzi’s tank! 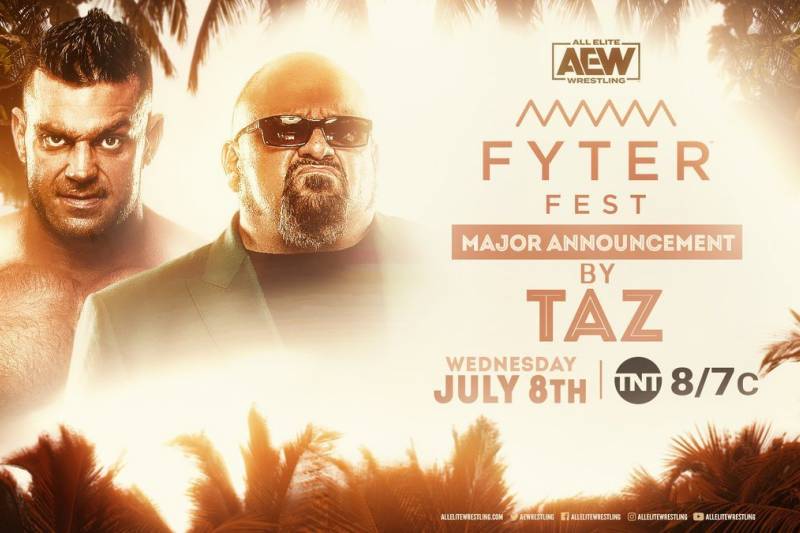 SHAWN: While Tony Khan was getting beat up over on USA, Taz came out with Brian Cage and reintroduced the FTW Championship. Taz talked, like he does. Cage stood around looking big and stupid, like he does. Taz presented him with the title belt. So, I’m guessing this means that Cage isn’t winning at Fight For The Fallen. Yeah, it’s some renegade shit, but I feel like it should have been done after he doesn’t win the AEW World Championship. 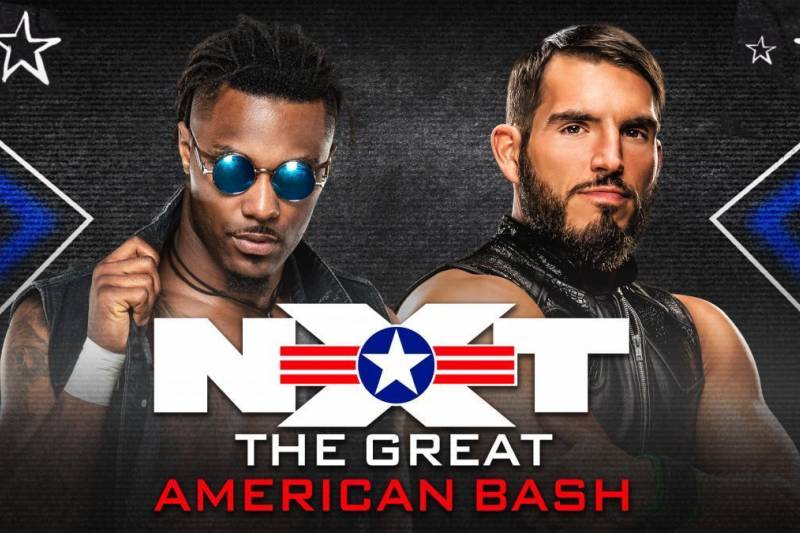 SEAN: Who’s House? It’s Kill-Shot’s House! Another cold match booking-wise, but MAN o’ MAN can these two put on a hell of a match at the drop of a hat! These two are damn near equally matched speed for speed and power for power. This was filled with impressive reversals and plenty of innovative offense that you won’t see in any other match! The only advantage Johnny has over Swerve is his in-ring experience in NXT. Johnny catches Isiah with a poison-rana, and then the One Final Beat DDT for the victory. – 3.5/5

Next week! Counter Programming at it’s finest! Cage v Jon Mox on the other channel, NXT answers back with Io vs Nox! Yeah, that’s the ticket… 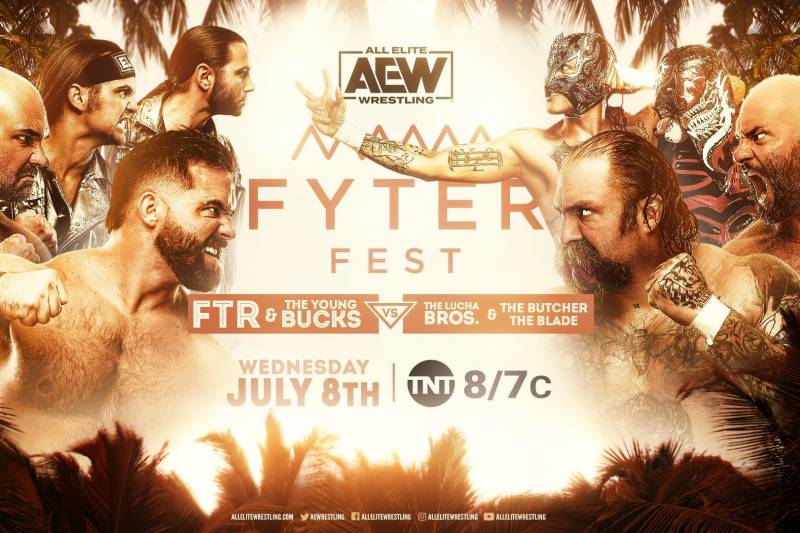 SHAWN: The Butcher & the Blade and the Lucha Brothers showed up in a stolen truck. Pretty sure that’s not a good idea to drive a stolen vehicle to live television. They took on the Young Bucks and FTR. Everyone realizes this is just setting them up to lose and eventually fight each other right? I’m guessing it will happen with a slow burn too. AEW likes that. Question, why did the Bunny leave the Butcher and the Blade? Did it happen on BTE? Stop doing angles on that stupid YouTube sitcom already. This match was amazing. Were you expecting anything less? An errant Superkick and the heels get the W and we’re on the road to the Bucks v FTR. – 4.25/5

Big Swole was served a suspension and not allowed to enter the building. She got all ratchet and ghetto and stormed off. From a girl who looks like a dude to a dude that transitioned to a girl. Nyla Rose returned to compete in a handicapped match this week. KiLynn King and Kenzie Page are the victims tonight. This was a quick squash match and if you got up to grab another drink, you missed it. It looked like Rose attempted a kip up and failed miserably, but I’m pretty sure I just say it wrong. Nyla got on the mic and told the world that he hired a manager and that he’s not ready to tell us who it is. It’s a rather sloppy promo by the woman beater but maybe I’m biased. 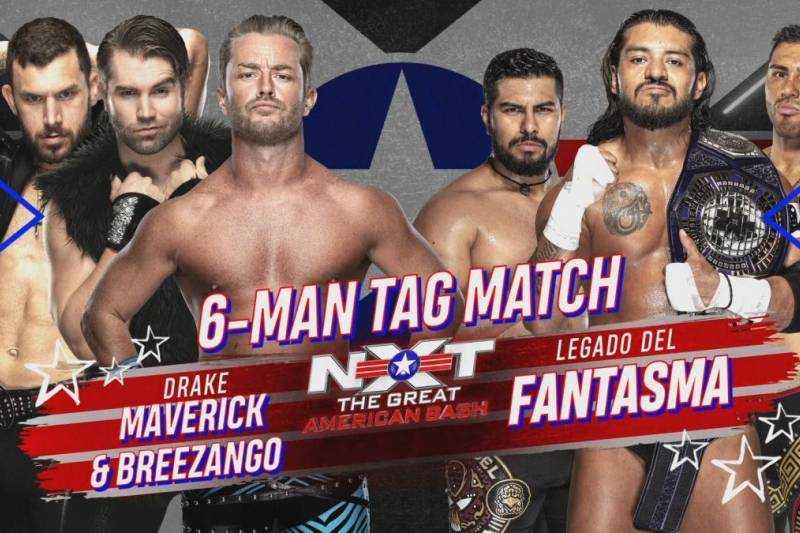 SEAN: Man alive, I love these Breezango elaborate entrances! Well, at least this has some booking history behind it. Escobar, the 205 Champion has continued to just assault Maverick ever since he beat him for the title. Typical Six-Man Lucha-Like Action, Fast-Paced, Break Neck speed Spot Spot Spot Fest. Escobar still has Drake’s number and pinned The Man with a new Deal cleanly in the middle of the ring. – 2/5 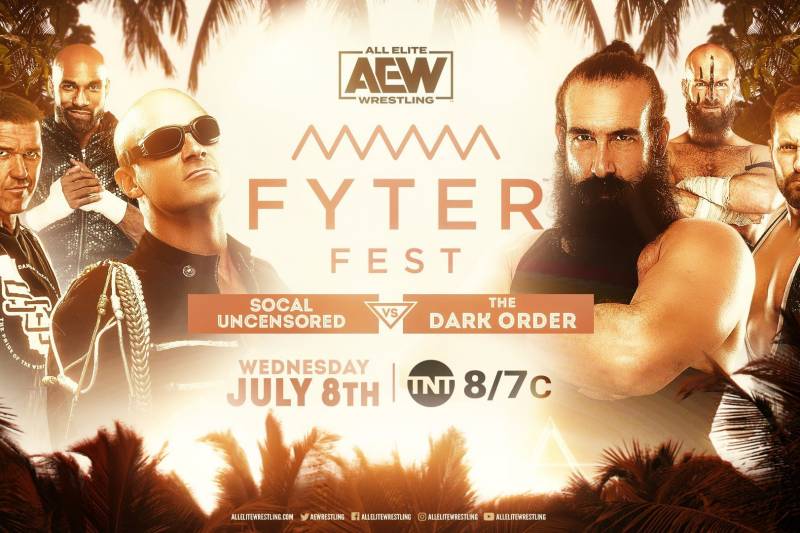 SHAWN: What the hell happened to Colt Cabana. Is that bruise real??? It can’t be. It looks horrible!! The Dark Order came out with five other members to watch. SCU turned from the top team in the company to a trio of jobbers huh? Well, Scorpio Sky does his thing in singles competition at least. I’m enjoying this angle with Cabana and the Dark Order. I imagine at the end he’ll turn on Brodie Lee but it’ll be a slow burn before we get there. Daniels got mad because Cabana broke up a pin. Hey Chris, he’s on the other team idiot. Also, that’s how you lose, aaaand he lost. – 3/5

SEAN: Satana dressed like a Halloween “sexy’ ref, where Mercedes is wearing Jimmy Havok’s and Ty Dillinger’s wardrobe at the same time! Why am I focusing on their ring gear? Uh, because this has squash match written all over it. Martinez is the new woman’s ass-kicking machine in town. She’s replacing Rhea Ripley, who replaced Shayna Baszler, who replaced Asuka. This is the start of her journey to NXT Gold. Count on that. – 1.5/5

SHAWN: Big Swole somehow snuck in the building and threw a paper cup or something at Britt Baker and her assistant. Isn’t Britt gone for six months? So, a slow burn to the payoff of this one? You don’t say?

Why do I have a feeling that Ronnie, from the hot sauce game show commercial, is going to show up on Dynamite and get a shot at the TNT title sometime in the near future? He’ll at least get a match on Dark right? 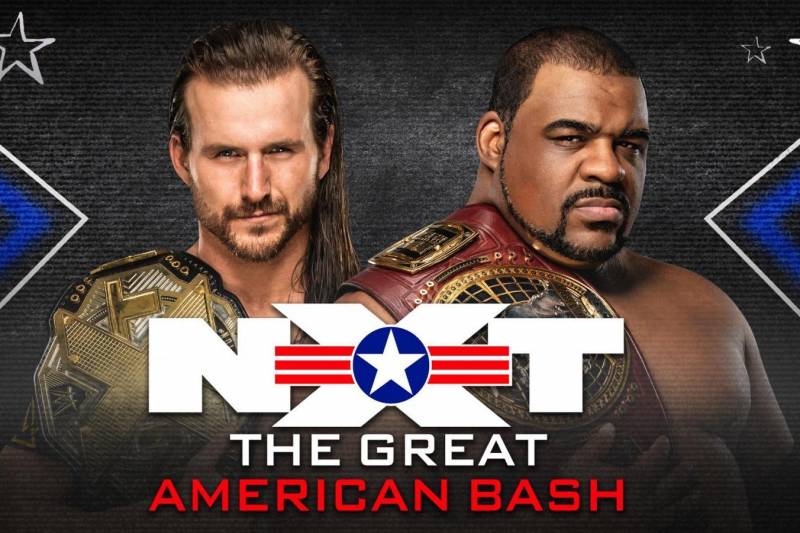 SEAN: And now. It’s time for the maaaaaaaaaaaaaaaiiiiin event! North American Champion Keith Lee vs NXT World Champion Adam Cole, Bay-Bay!! It’s Title for Title! This is WrestleMania 6 all over again! The Undisputed Face of the Brand Adam Cole vs the Limitless Force of Nature Keith Lee! This was a TakeOver Level Main Event on TV. WATCH THIS MATCH. – 4.75/5

SHAWN: It’s main event time. And what a main event this was. Unlike the other show, where we already knew the outcome because some big Indian decided to post a picture on Twitter. Jericho was the heavy favorite going into this one but Cas did a great job in showing people just what he can do. Tons of spots and some really good wrestling. While Orange Cassidy isn’t for everyone, if you decided to watch the other show, go back and watch this match. I’ve got nothing more to say. – 3.75/5