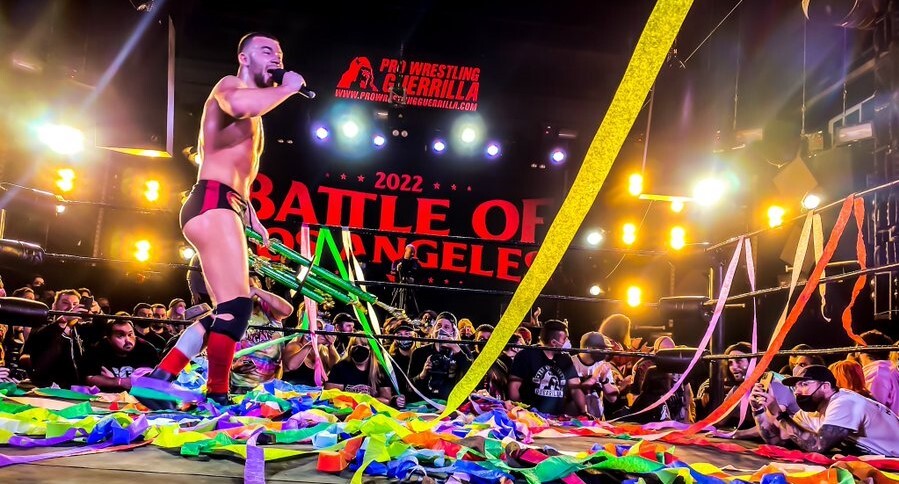 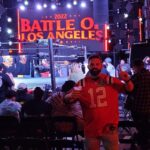 Following a two-year hiatus, Pro Wrestling Guerrilla‘s famed Battle of Los Angeles tournament has returned. Instead of the traditional three nights, we got two– both to a rambunctious, sold-out Globe Theater crowd in downtown LA.

Here’s a quick re-cap and mini-review of all the weekend action. 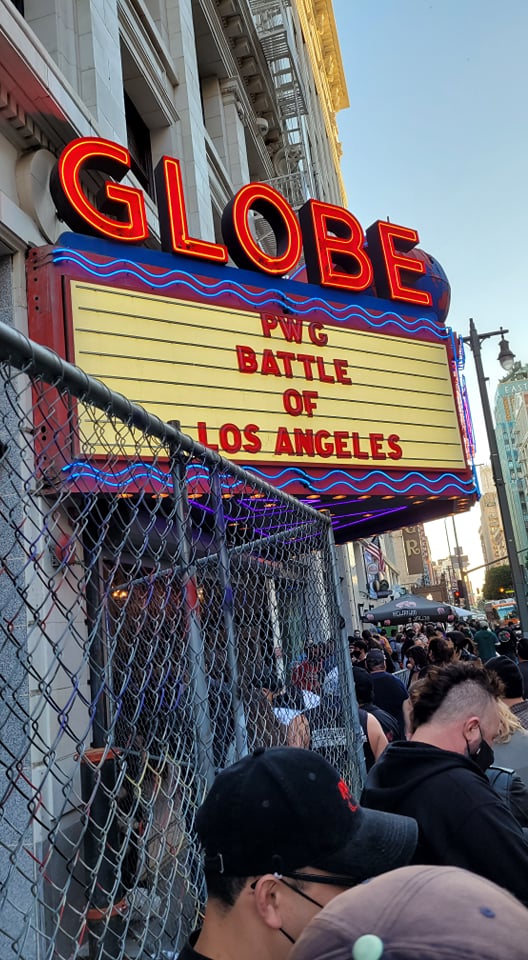 Wheeler Yuta v Blake Christian – 3.5/5 >>> Nice debut for Wheeler with Blake showcasing his high spot prowess and improved mat work. This was a replacement match for David Richards vs. Jonathan Gresham, and they did their thing!

Buddy Matthews v JONAH – 3.25/5 >>> Fun WWE parody match that would prelude a great BOLA narrative for Buddy with a chair curb stomp finish. This one had rock/paper/scissors and some cheeky homages to (the same night WWE Royal Rumble‘s) Seth Rollins/Roman Reigns. 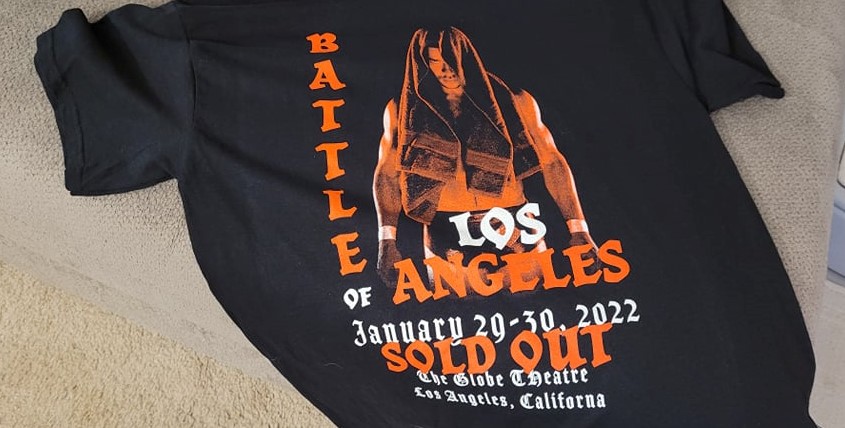 Daniel Garcia v Kevin Blackwood – 3.75/5 >>> Snug strikes, strong suplexes and tight submissions that set the stage for what was to come. Both guys looked great and worked well right away. Garcia proved he wasn’t fucking around with that apron piledriver! 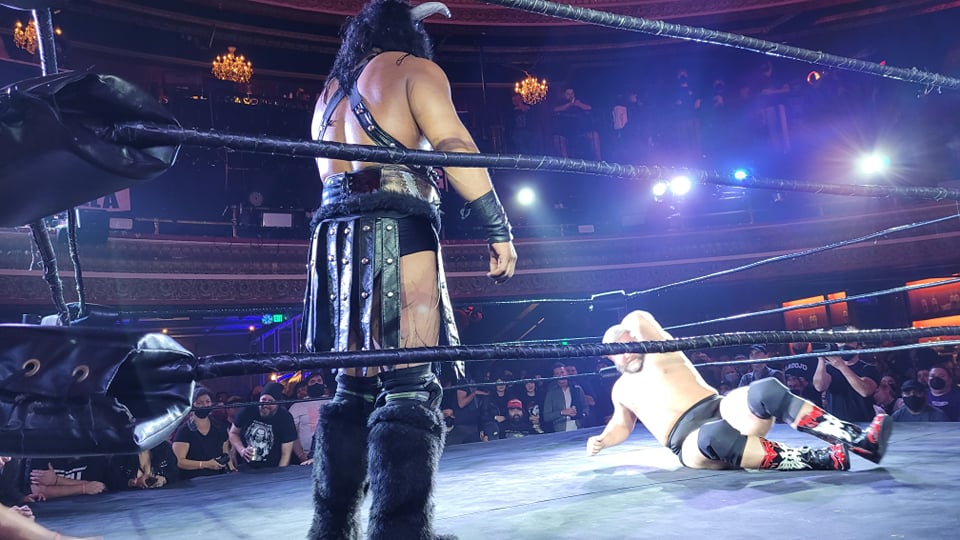 Alex Shelley v Lee Moriarty – 3.25-3.5/5 >>> A better match if you knew all the “master vs teacher” easter eggs going in and have a deeper appreciation for baby v heel counter-grappling. A little slower than everything else on the card, but still pretty damned good. 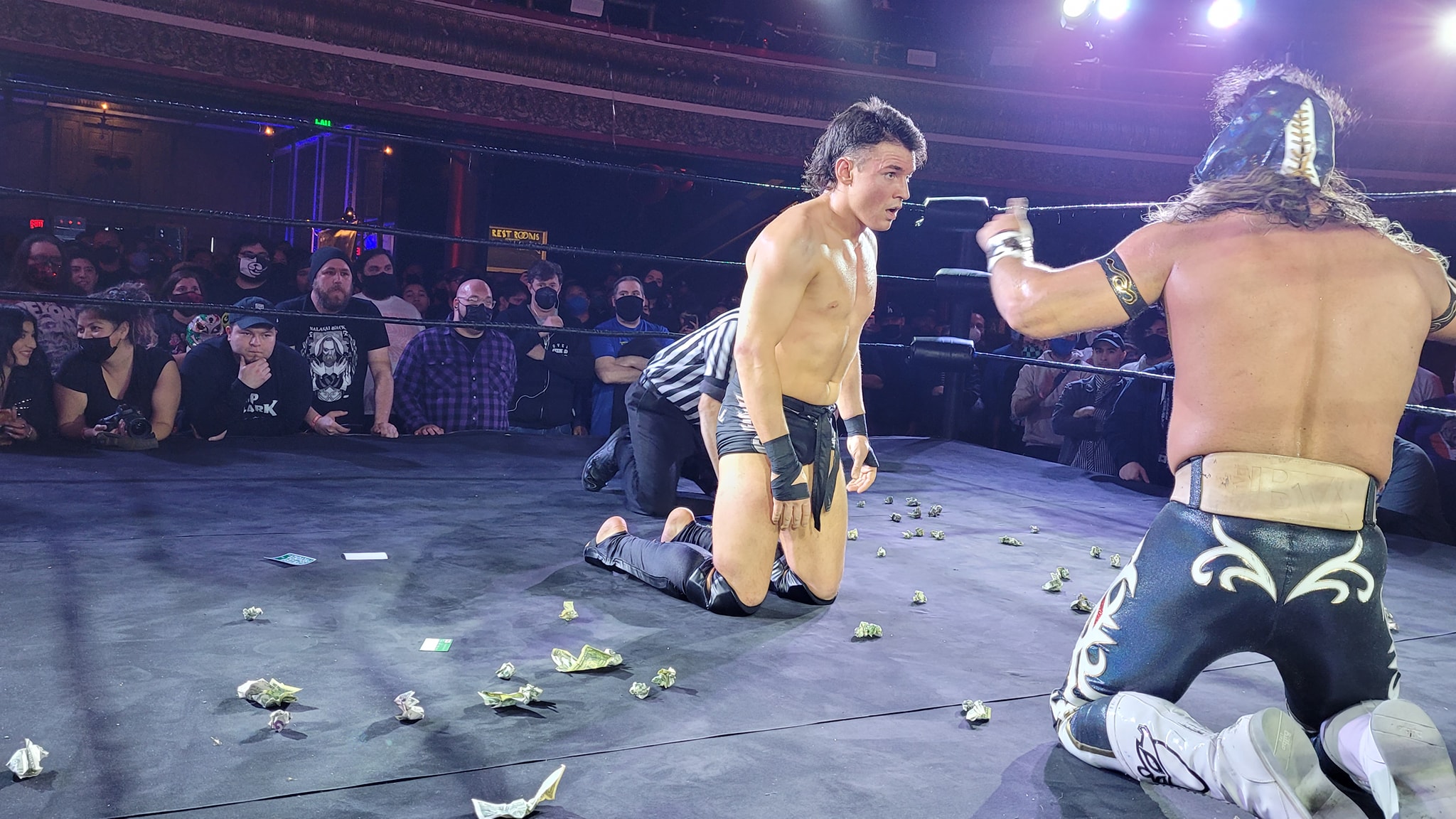 Main Event: “Speedball” Mike Bailey v Bandido – 4.5-4.75/5 >>> This early MOTY candidate is an also arguable candidate for Best — at least Top 3 — PWG Match At The Globe. I’m not kidding. Crowd went insane for both guys, but especially Speedball. They worked damn near flawless together. Expect a PWG title match for the rematch later in the year.

Front to back, one of the most consistently strong PWG events I’ve been to in the past 5 years. Dragon did a bang-up job booking the first round with zero downers, and finding the right chemistry for each match-up. The main event was an instant classic.

Black Taurus v Aramis – 4/5 >>> Blow-away lucha opener that had everybody in the Globe rockin’. Insane high spots over and over and over. Even a pinfall miscommunication was easily overlooked with how dynamite this was! 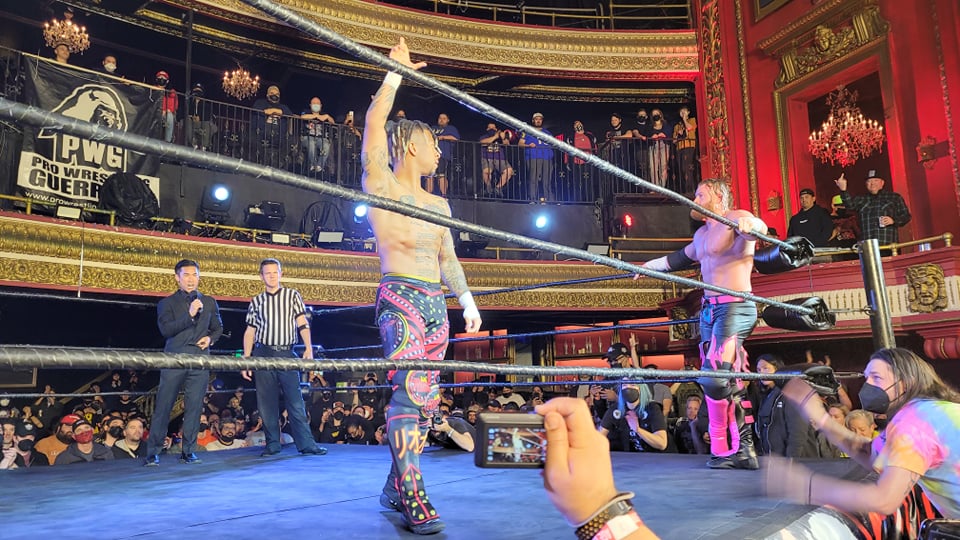 Lio Rush v Buddy Mathews – 3.25-3.5/5 >>> Difficult to rate a match that ended via injury and DQ… That said, Lio’s selling was incredible in the early going, while Buddy cut a terrific heel promo leading up to it — turning on the fans — and worked strong as a baddie until Lio’s shoulder injury (following a buckle bomb and curb stomp). Well, this one had two things you hardly ever see in PWG—promos and DQ’s, with this being just the 3rd Pro Wrestling Guerilla match to end in such a fashion since 2010.

“Speedball” Mike Bailey vs Wheeler Yuta – 3.5/5 >>> Yuta is super smooth, while Speedball sold like a million bucks. I wish Yuta would show this much charisma in AEW! 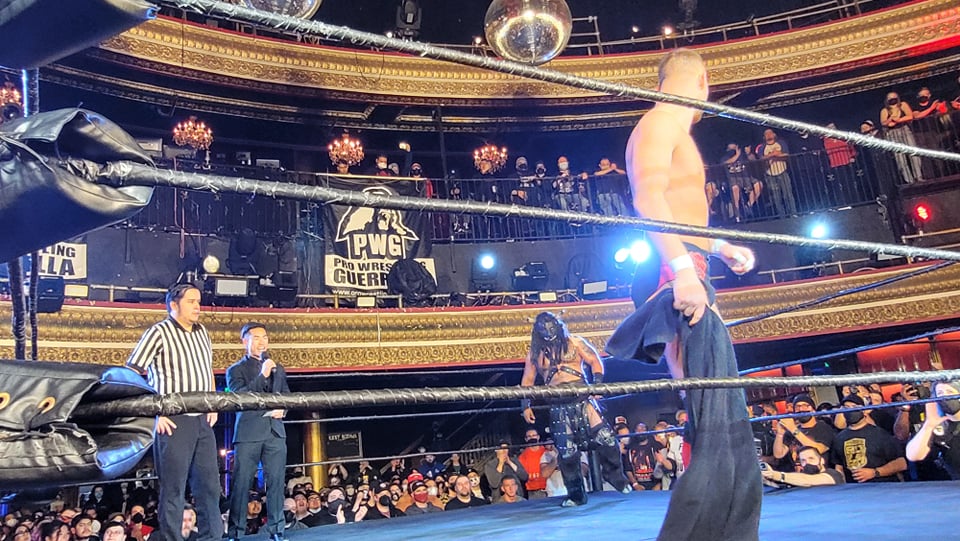 Daniel Garcia v Black Taurus – 3.75/5 >>> Another banger, with Taurus gettin’ the babyface love and Garcia growing into even more of a killer; Red Death stepped out of the Black Death with tons of fearless resilience. 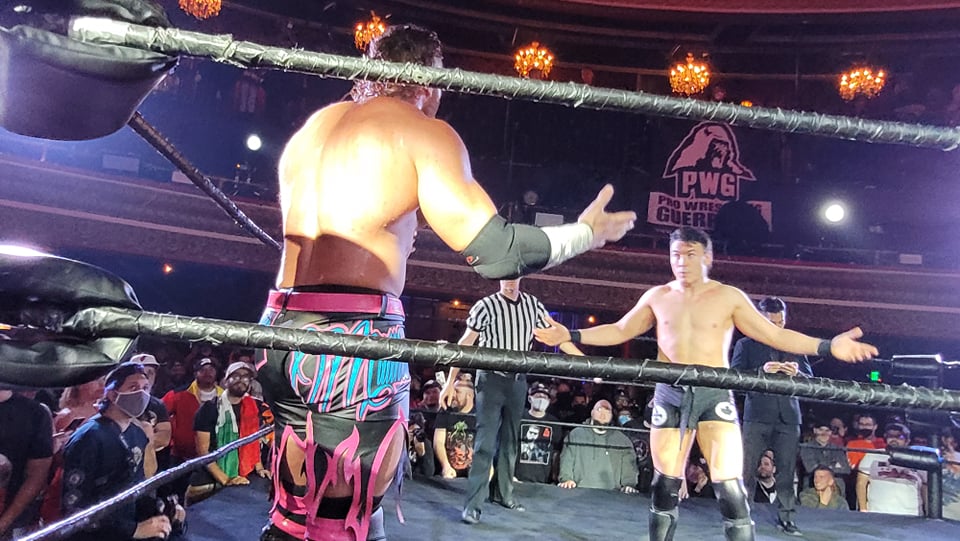 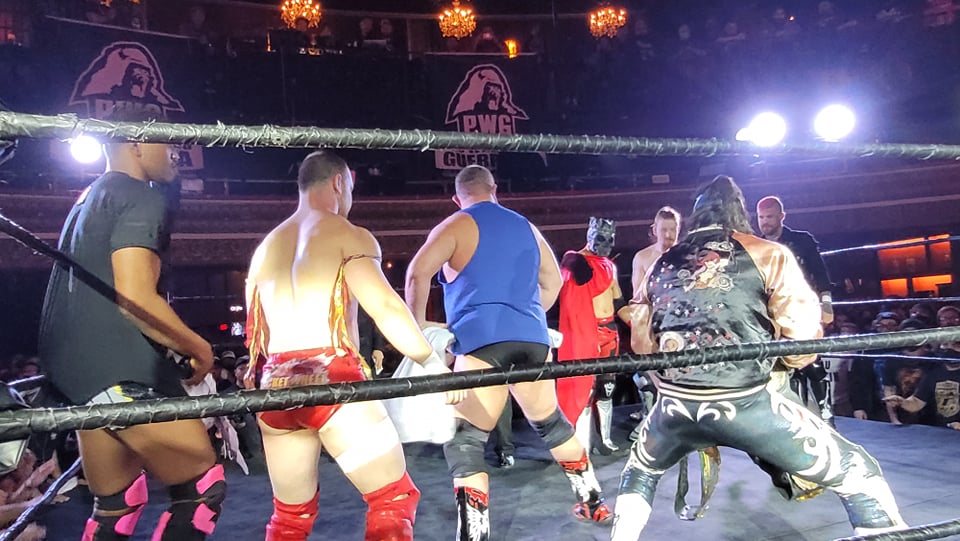 Jonah, Kevin Blackwood, Rey Horus, & Blake Christian v Bandido, JD Drake, Jack Cartwheel, & Lee Moriarty – it doesn’t matter/5 >>> The annual “Loser’s Ball” BOLA tradition with high spots galore and fun comedy moments. Hell, Blake had a TV remote that would literally pause the action. Jack almost killed Blackwood late in the match — in a bad way — after almost killing everybody — in a good way — with a crazy balcony spot. JD Drake had his most fun dealing with Jonah. Rey & Bandido mixed it up once again, while Lee and Horus looked to have the most fun overall (Rey would hiptoss, well, everyone — until the Ref Justin hiptossed his ass on the attempt!). While not without its messy moments, this 8-manner was a fun, much needed break before the finale. Rating this would.. not be cool.

Daniel Garcia v “Speedball” Mike Bailey – 4.25-4.5/5 >>> The first BOLA singles main event since 2013 was a great Days of Future Past match-up that had it all: extremely stiff strikes and especially kicks from Bailey, who used a zillion variations (crane, windmill, spinning, crescent, karate, kung-fu, etc.); innovative drivers, punishing, rolling knee-crushers (almost literally); outstanding ring psychology, mat work, selling, shit-talking, aaand… I really wanted Speedball to use the theme to Cobra Kai as his entrance song (instead of “Brass Monkey”). In the end, it was lengthier and not as mind-blowing front to back as Speedball v Bandido, but close. A fitting end to a wonderful weekend.

BOLA 2022 mostly wound up how I had envisioned, minus the injury to Lio, which was a shame seeing how much heat his match with Buddy had, and how terrific Rush was in BOLA leading up to the “205 Live” rematch. Shame we’ll never know how he and Speedball woulda panned out, but let’s pray for Lio’s sake that it’s sooner than later.

Garcia made himself a true star in this tournament, and begin his tournament winning promo with a striking sentiment (and I paraphrase): “PWG is back… Independent professional wrestling is back”. And for this weekend, it certainly was. The buzz in The Globe certainly felt better than it had since the Covid-era began. The entire weekend event went without a bad match, or at least none that felt the need to have light tubes, barbed wire and tacks. While I kid, it’s good to feel that familiar buzz again from attending PWG.