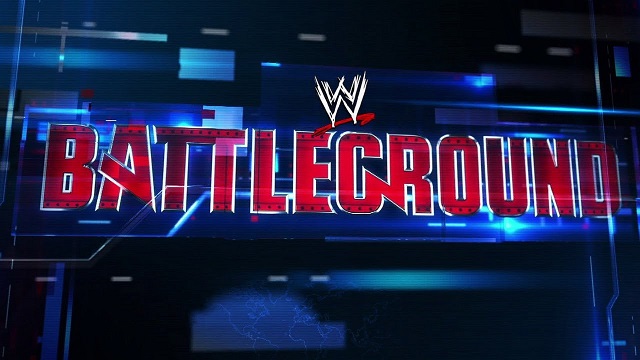 WWE Battleground is this Sunday. While not one of the fed’s more popular Pay-Per-Views — which has been basically sold as a $9.99 WWE Network event up to this point — the card is shaping up to be a pretty good one.

This special edition of the Shooting Star Press also sees our largest cast of Ringside Apostle journalists yet.

So don’t be a lemon, folks. Be a…rosebud. Read on!

Chris Jericho made a splash just 10-days ago on RAW when he put away his good friend The Miz before an uproarious crowd. Hell fucking yeah, the Ayatollah of Rock ‘N Rolla was back!

The timing wasn’t that odd either, since Jericho mentioned just the night before on Twitter that he “invented Money in the Bank.” While Jeff Hardy, Edge, and a few others may disagree, it was that bastard, Cena-jobbing Bray Wyatt who actually did something about it, putting The Return of Raw is Jericho to a stuttering halt.

Jericho has snaked himself out of bumrushes from the Wyatts ever since.

Winner: Biased as fuck — with no apologies to BISHOP Wyatt (who you will watch down below), Chris Jericho wouldn’t make this huge comeback only to job to the guy who can’t beat Cena. Sure, “The Best in the World at What I Do” is also a master at putting people over (i.e. Fandango), but something tells me he’ll find another sneaky way to get Bray’s panties in a bunch– and cheat out a quick victory. Someone call Dana White; this may just end up Match of the Night.

As the build for this weekend’s grudge match between two former partners-turned-hated rivals comes to a close, the WWE is providing us with a glimpse of the future now in the form of Rollins versus Ambrose. There’s no arguing that this match-up will more than likely steal the whole F’n show, and also end up main eventing a Wrestlemania or two some point down the line.

The only real question, then, is: How far will these two push the envelope?

They know each other inside and out, so expect a ***** match out of these rising stars.

Winner: This is a tough one. Although the WWE traditionally books MITB winners horribly after they win the case, this Disciple really doesn’t see that in the cards for Rollins. While common convention suggests the face (Ambrose) go over on the PPV, I don’t see that happening here. As much as I hope I’m wrong, Rollins will win due to some shenanigans, with both men looking strong in the effort.

It’s time to call the Ghostbusters because there is definitely something strange going on in the WWE neighborhood– and I’m not talking about Dean Ambrose or Bray Wyatt. Don’t get me wrong; both are pretty strange. But, there is something EVEN STRANGER going on. Ladies and gentleman, Jack Swagger is over.

Let that sink in for a minute.

Don’t lie, every single one of you at some point or another has wondered when this man was going to get future endeavored. Yet, he has weathered the green smoke filled storm and come out on top waving his American flag in a blaze of glory. In all fairness though, I think the true reason Swagger is still on TV is Zeb Colter. Without him, something tells me Jack would have been way ahead of Jinder Mahal in the unemployment line.

Despite the formulaic plot-at-hand, Swagger can wrestle when he puts his mind to it and Rusev has showed us he has some high upside for a man his size (just check his match vs. Reigns from this past week’s Smackdown). While it’s hard to see this feud ending here — because on principal, Swagger has to eventually come out victorious — it’s just as hard to see Rusev losing outright, as well.

Winner: I expect a screwy finish that sees both Lana and Zeb getting involved somehow and Rusev escaping with a shallow victory in round one of this ongoing saga. But, hey, anything that keeps Zeb talking and Lana showing up and twirling around is A-OK in my book. So in closing I ask all of you to rise, place your hand over your chest, and loudly proclaim, “WE THE PEOPLE!”

Battleground will make AJ Lee and Paige’s third encounter, which is a wonder why Moses Lee bailed on this one!

Maybe it’s the fact the last two matches seemed like minor confrontations. The first time Paige beat AJ, we were caught by surprise. When AJ returned and beat Paige, the roles of heel and face were reversed (which was probly an extension of AJ’s recent marriage to CM Punk).

Also, the shock value for that victory wasn’t nearly as high as Paige beating AJ. So long as my should-be-Harley-Quinn-at-home AJ makes me yell out a “YES LAWWWWWWWWD!!” or two during the match, we good.

Winner: AJ Lee will take a page/Paige out of her hubby and make that trick submit.

The highly prestigious intercontinental title will be on the line in the form of a battle royal. The 73rd IC champ will be crowned and he will join legends such as Marty Jannetty, Santino, “Wild Man” Marc Mero, The Mountie, and of course Dean Douglas (11-minute title reign) as a member of this exclusive club. Or if you prefer: Macho Man, Steamboat, Perfect, and Bret Hart, I guess.

I do love me some battle royals though.

Lets just trim the fat. There are 3 people who can actually win this thing: Cesaro, Sheamus, and everybody’s dark horse Bo Dallas. Others may think “The Miz”, Ziggler, Kofi, and Big E may have a shot. Kingston and Big E have been hot but seem to exist as a tandem now for some reason. Ziggler appears stuck again, as he is too busy beating freakin’ Fandango with the aid of his dancing ex-girlfriends. And I just don’t see the ”The Miz” winning the title after jobbing to Jericho.

But Cesaro and possibly Sheamus are probably the favorites.

Sheamus can unify the titles but doesn’t really need it and Cesaro probably needs the push the most. My head says Cesaro, especially with this losing streak, but dammit my heart says Bo Dallas. Besides being the absolute best and interesting thing going, WWE has given unproven talent the IC strap before. Also, there is a natural rivalry with Bad News Barrett (See Royal Rumble 2013). So lets keep it going. How inspirational will my man be with the IC title.

Winner: Bo Dallas defies the odds. He eliminates Cesaro to win it, which in turn inspires me to seek a promotion at work. Thank you Bo. I’m a BOliever, now and forever.

So is everyone expecting “My Client” BROCK.. LES.. NARRR to interfere in this one and cause John Cena is championship? Because the writers over in Stamford, CT know what we’re saying, thinking and predicting, and always nearly end up with a more standardized finish than we assume.

Perhaps that’s the downfall of the internet, in that it’s hard for anyone to really become surprised anymore. And to think that I used to get my Pay-Per-View prediction fix a few weeks ahead via the WWF Magazine!

Regardless of who gets screwed– don’t expect too much. Lesnar interference is indeed a strong possibility despite the fact the WWE knows about that “leaked” match for SummerSlam pitting our ol’ pal John Cena against the Beast Incarnate.

The #1 reason the WWE may just go through with it anyway won’t be a Kane chokeslam from Hell. No, it’s more because “The Viper” RKO and Big Roman Reigns have plenty of unfinished business to settle. Seeing all the madness that is a Fatal 4-Way, we could witness as many as 5-to-6 others interfere in this one to alter the course of that one month Road to LA’s Staples Center.

Seth Rollins has quite the expensive briefcase handy, must I remind you. Plus, just the other night on RAW, Michael Cole, JBL and “The King” joked about the “firing” of Paul Heyman, seeing how he didn’t accompany the great Cesaro to the ring for his match. Don’t be surprised if a pissed off Cesaro (in which he will be if he loses the Battle Royale with Cheese) fucks things up for Reigns, or whoever is dominating early. The Shield’s “Vick Mackie” is now one of the most beloved wrestlers in the business, has all the momentum in the world, and has even poised himself up against the Boston Babyface Cena. Reigns will be putting in work.

But they ain’t ready for that yet. Remember, this “PPV” is only going to cost you $9.99, so it’s highly unlikely there’ll be any Wrestlemaniaesque storybook endings here. Cena and Reigns will get to see eye-to-eye for a little bit, but it won’t be enough to take this to the big one in August.

Winner: Sting, via Scorpion Deathdrop. *smack in the face* Oh shit! Sorry. Was dreaming for a bit. It is a touch after 3 a.m., after all. I can tell you — as I widen my eyes for a sec — that the winners won’t be the fans sitting inside Starbucks catching this one on a stream; but at least the plethora of main event match-fuckery will raise the stakes even higher for next month’s Slam. Cena wins the match by pinning Kane, but immediately loses the title to a swift briefcase job via Seth Rollins, with help from Stephanie/Triple H/Paul Heyman/Brock Lesnar.

Yup. There’s a New Authority in town, with The Shield buried even further in limbo, and Triple H exposing a new t-shirt the next night on RAW that proudly proclaims that, hey, he too is a “Heyman Guy”.

WWE Battleground airs this Sunday at 8/9c on PPV and the WWE Network.