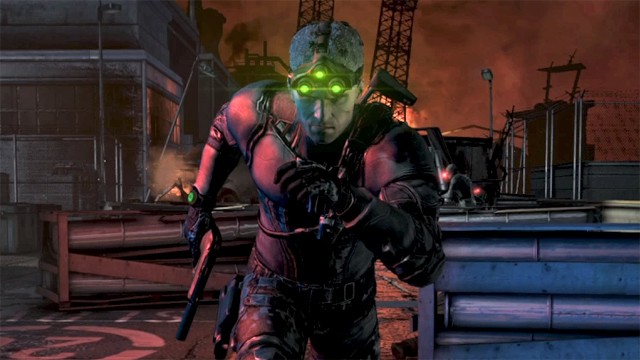 Splinter Cell: Blacklist is one of the year’s nicest surprises…although it shouldn’t be, and for several reasons.

The obvious reason being that this 6th console Splinter Cell — the 3rd and perhaps last of the current gen — is once again put out by Ubisoft, the company that sets the standard in video game development. The next reason is that Blacklist is a return to nonlethal stealth, following a few scary years of artillery-heavy gameplay and several delays following E3 2-years ago (perhaps concerning Splinter Cell‘s latest direction). Thankfully, the latest edition performs like a greatest hits in terms of hide-and-seek destroying. Sure, there are less environmental kills (you won’t see any more of those cool hanging-from-the-chandelier attacks), but the oil drums and fire extinguishers are still there to blow (just loved cat-calling a “heavy” right into a shot-up damper).

Sam Fisher is also more athletic and nimble this time around, breathlessly gliding from metal grate to air vent, to even cliffs, with ease. That’s not to say Blacklist isn’t realistic. Sam coughs up plenty of heavy breaths once caught in one of many freakish firestorms, if you’re not exactly smart enough at being incognito throughout the game, of course. And lest we remind you, this isn’t Call of Duty (despite the game switching to 1st person during the Briggs non-optional missions). Most times, even with the heaviest Kevlar suits, Fisher can’t be hit with more than one bullet — or even take more than one or two melee strikes — especially if played on the harder difficulties, Realist and Perfectionist.

Thankfully, Blacklist offers some pretty intense customization across the board. You upgrade guns, gadgets and armor (the choice of infra-color is cool, which also light up when in darkness, as is the healthy choice of both Sonar and NVG goggles) towards any game mode with doe earned from several ShadowNet challenges, such as putting 3 or more guards to sleep with gas (not the type your favorite Monsignor has after a mean steak-and-cheese, either), or stunning 50+ soldiers with your crossbow. It’s good the rewards are very high, as you garner points for going Ghost (nonlethal stealth), walking with a Panther (a mix of stealth and action), and full-out Assault (exactly as it sounds), because everything seems expensive; especially, when you realize you can also custom up the plane to give you more ammo during mission drop-offs, or offer more intense weapon choices, such as laser-pointer Subs from the black market.

There were several frustrating parts/checkpoints during the campaign, and some were even my fault, like running around a metal grated stairway to hell for nearly an hour until I realized I could toss one of the guards through the door. You know, since he had the security pass on him. It was pretty hilarious, and gave me a moment to smile in a game full of terror and Tom Clancy-heavy techno-dump.

As a political thriller, you’ve read, watched or played this all before. Blacklist offers no origin tales, or getting-to-know-you stories. Even the villain doesn’t come off as appealing as, say, Raul Menendez in COD: BO2. No, the game is primarily about the special forces business and the worldwide terrorism at hand. Although the acting during the cutscenes is cool, they primarily take place in an aircraft command center with a bunch of folks bickering (which is also where the “menu” takes place, which is rather tight). But, hey, at least running through glass and quickly fast-roping away from a horde of enemies is exhilarating and most of the locations are appealing (“Go” to Denver!), if not exactly wondrous (Splinter Cell: Blacklist requires 2 discs, with multiplayer and an additional HD textures upgrade on the second disc).

This side of an adrenaline-gushing escape from Guantanamo Bay — a first for gaming, in fact — the game offers much your typical spy-gaming situations. Sure, there are beautiful moon skylights by the coast, and cool railroad tracks you can plunder enemies into; but you’ll undoubtedly shout “of course” when there are folks to be saved on yet another damn video game subway line, and have to play “shotgun supervisor” to a gazillion enemies through numerous Goldeneyesque cubicle offices.

Less fun, is the fact Ubisoft didn’t strike a deal with the legendary Michael Ironside, the classic voice of Sam Fisher. Things don’t take long for Eric Johnson‘s new role to feel awkward, either, when an early level grants Fisher a call from his twentysomethings daughter — and both sound around the same age. Yikes. By now, our favorite spy this side of James Bond and Solid Snake is supposed to sound almost halfway to the century mark, but at least in the case of Blacklist, that just ain’t happening. And, since Blacklist is no Convinction, Johnson gets away with merely doing an admirable job. A lot of the script is spread among his crew, except when you’re able to brilliantly whisper and harass guards with the select button. Players can lure dudes into a room by flicking the lights or shooting up computers; toss sticky cameras (that will make either weird alien noises, or even purr like a kitten for surrounding attack dogs); pilot air-drones that can both detonate and send electric shock; stealth neck-slice or snap-mare foes to sleep; and even light up guards with their own explosive remote drones.

Being stealthy is very healthy!

Finally, Splinter Cell just wouldn’t be Blacklist without playing the same cat-and-mouse games with enemies — with your split-screen buddy, online girlfriend, or vengeful grandma. The campaign offers four option 4E Briggs Missions (running and rocketeering), which can be be played either open-sandbox style or actual co-op. There’s more from the Four Echelon crew, with the hacker Charlie’s enemy wave mission, or ops-manager Grim’s ghosting requests. Better yet, is the return of Spies vs. Mercs, where players can go 2 vs. 2 via original Xbox and PS2’s Splinter Cell: Pandora Tomorrow or 4 vs. 4, which is new to the series. Basically, you go and hack the terminals and your friends or online enemies try to mow you down. Seeing how I suck at multiplayer COD and enjoy being very stealthy (Assassin’s Creed, Far Cry 3 and Dishonored are just a few of my favorites), there’s going to be plenty of hours spent on this mode…even after I pick up an Xbox One.

Speaking of next-gen, it’s not hard to see why Spies vs. Mercs was the most popular news concerning SC: Blacklist coming out of this past June’s E3. With Ubisoft doing their damnedest to show off their higher resolution tyrants, Watch_Dogs, AC4, The Division, and The Crew at the conference, the new-and-somewhat-improved Splinter Cell just had to take a backseat. But, if you’re like me and miss a good ol’ game of cat n’ mouse, or just the original stealthiness of Splinter Cell (2002) and Chaos Theaory (2005), the Blacklist package may be worthy of not only the attention of the company line, but yours, too.

Splinter Cell:Blacklist, released on the Xbox 360, PS3, PC, and Wii-U platforms, is in stores now.