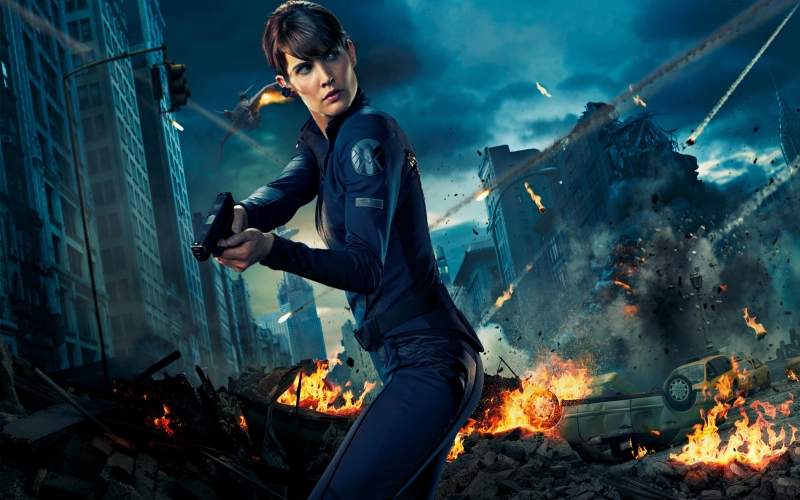 Now that I got rid of the majority of diehard comic nerds who shouldn’t be reading this until May 4th, anyway, I’d like to continue. The Avengers is the most fun I’ve had at the movies since that one time at the bijou back in ’02 with what’s her…so easily sidetracked. More apropos, the only possible way the “most anticipated comic book movie of all time” achieves colossal expectations, makes the absolute most of its 2-hour-and-22-minute duration, and coddles to comic geeks and the never-too-curious green team is.. having director Joss Whedon.

Director Joss Whedon has a nice ring to it. For the creator of TV’s “Buffy the Vampire Slayer,” “Firefly,” and “Angel,” The Avengers is as impressive a writing-slash-directing film debut as any, because, let’s face it: nobody saw Serenity.

But nearly everyone will see Avengers and everyone should. It’s altogether impossible to miss the odes to past geek lore in this ultra-dynamic superhero team-up: Star Wars, Raiders of the Lost Ark, Die Hard, Inde-pen-dance.. Day. The man most known for niche nerd television just went all epic action-adventure-Sci-Fi on that ass.

What gives this heavyweight psychodrama an opportunity to rub shoulders with George Lucas’ historical works is the amount of depth put forth in character development. Seeing a bunch of guys and gals — and I’m sure Jennifer Walters, Bobbi Moore (Ha! I was right about this one – 2015 Moody), Carol Danvers and Jessica Drew are all on standby — dressed up in rad costumes, kicking arse, and saving the effin’ world surely would be fantastic enough. Yet, Whedon’s ability to puncture the audience into loving these kooky folks, whether we already know them from the funny pages or not, is what separates this superhero movie from your usual summer blockbuster.

You see, The Avengers is like a 12-issue arc that zips in a Jif. After busting out the gate with a gut-wrenching car chase that sees the vainglorious God of Mischief, Loki (Tom Hiddleston), turn one of Nick (Sam Jackson) Fury’s facilities into a volcanic pie-hole, the film transitions to significant bits about several of Strategic Homeland Intervention Enforcement Logistic’s recruits, such as the recent activities of superspy Natasha Romanoff (Scarlett Johansson’s Black Widow) and genius scientist Bruce Banner (Mark Ruffalo’s Hulk).

And since I mentioned earlier that Peter Parker was absent (he’s a New Avenger in the comics, dammit!), Clark Gregg’s scene-stealing Agent Coulson gladly takes on Spidey’s usual banter as hysterical man out-of-place. Loki crosses malevolent wits with an alien cross between Blastaar and a Super Skrull on some forbidden galaxy to contemplate the power of a holy spear and the Tesseract ala the Cosmic Cube. Major fun. The Avengers‘ holy trinity also have their classically-humorous, initial standoff when every nerd’s wetdream of a Steve Rogers, Tony Stark and Donald.. Thor pissing-contest comes to silver screen fruition.

That chemistry between the three Marvel movie vets, Chris Evans, Robert Downey Jr., and Chris Hemsworth, is seemingly effortless this time out. And almost to the point that one fantastic war room snark-fest came off like it was written by Marvel Comics writer Brian Michael Bendis. It’s this furious fanboy concentration former-Astonishing X-Men scribe Whedon provides in this $220 million dollar epic that pops like a wildly imaginative $220 million dollar comic. That means so much to so many. And, while geeks will be geeks, I don’t expect this Saturday morning that fellow bloggers and podcasters will complain too much about what should have been.

And for that Mr. Whedon, we sa-luuute youuu.

P.S. Everyone should see Serenity.

2 Replies to “THE AVENGERS [Review]: A ‘Smuldering’ Masterpiece.”