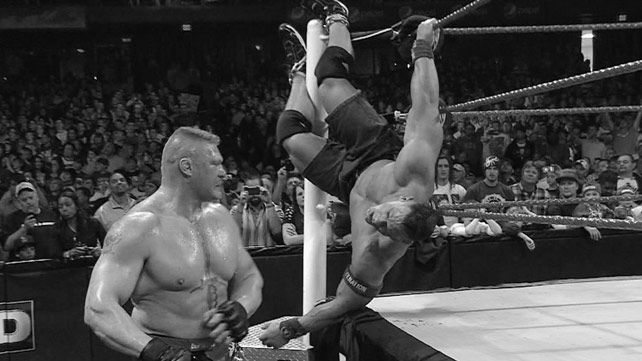 Now that nearly everyone in the Ultimate Fighting Championship is evenly matched, I yearn for the days of a good ol’ fashion brawl. Sure, the WWE is.. well.. scripted, but there’s no doubts these two mammoths of men paid a price in their “Extreme Rules” confrontation in Chicago last night!

Path to what, however, I don’t know; with CM Punk dominating the wrestling biz at the moment (he even drowned the historical return of Jericho in consecutive matches), will there have to be a Hogan/Warrior moment for the two in the near future?

Did the WWE rush the return of Brock, only to have him lose his first match to a possible medical-leaving Cena?

The interview following their brutal brawl — ending ever so sweetly with Cena landing the “FU”…err…”Attitude Adjustment” on the ring steps stairs — was a bit awkward. It’s as if WWE is really stretching their thanks to the crowd for not booing Cena any louder than they already were.

I know Vince struggles with the notion that Cena serves as the only true Hogan-type to all the good little CCD-Attending, straight B+-earning spoiled brats out there. But, all asides aside, the WWE’s recent pay-per-views have proved that sports entertainment may be on its way to snatching back the spotlight from “entertaining” sports.

Ever since the UFC went legit with ESPN coverage and began pushing their highly-skilled brawlers as professional athletes, there’s no doubt that Dana White and Zuffa’s near-monopoly have lost a bit of an edge.

The level of personalities on par with the fighters who helped push UFC to where it is today — the menacing Cobra of Royce Grace, blue-collared Matt Hughes, cocky beach-punk Tito Ortiz, cold-as-ice biker-boy Chuck Liddell, lovable ghetto clown Quentin Jackson, etc. — are nowhere to be found. Just about every fighter in UFC these days is five-tool. Imagine if every player in Major League Baseball had the abilities of Matt Kemp, Ryan Braun, and Hanley Ramirez? As if baseball wasn’t already boring enough.

At least the WWE has sort of a plan.

Sure, their creative would probably take a backseat to my niece in a room full of LEGOS; but pitting an invincibly-evil UFC fighter against their best you-can’t-wrestle wrestler personality was smart. And surely more enthralling than the 12-second to 15-minute snooze-fests the UFC has been coughing up lately.

At least on this one night in the Windy City, “Extreme Rules” proved a winner over having too many.

Thanks to my friends at WWE.com for the cool photo.

4 Replies to “Dood, that Brock/Cena was the best UFC fight of the year!”