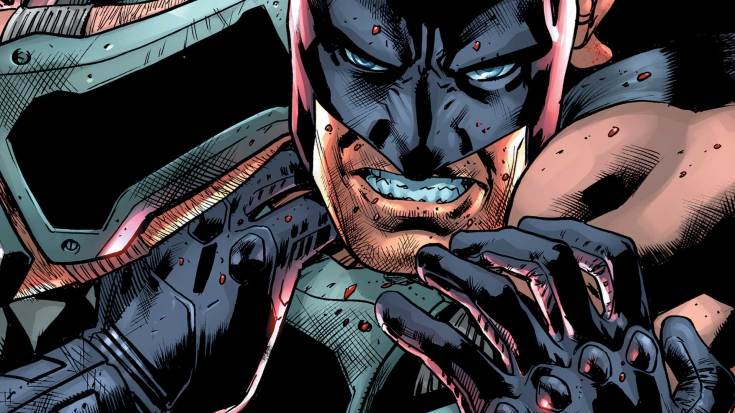 Well, well, another week, and yet another Fistful of Comics coming your way, care of GodHatesGeeks. We’ve got a who’s who of titles, and publishers, and you best believe we’re gonna give you our say in which ones to pick up! From heroes, to villains, to antiheroes, to Jesus Christ Himself, we’ve got more characters here than you can shake a fist at, with some books so good, one of our faithful just had to write two reviews!

Let’s get right to it, geeks and geekettes…!

This was Bryan Hitch’s issue. Bryan choreographs a pretty stiff fight. He captures Batman’s necessary brutality in taking down enhanced thugs who do not feel pain. Sometimes it seems his movements are off balance and awkward but Bruce is enjoying every second.

Warren Ellis is on cruise control and injects his wit in the form of Alfred’s comedic retorts to let the reader know it’s still his book. I laughed out loud on two occasions. Warren Ellis and Bryan Hitch seem to be criticizing but also having fun with the BATMAN mythos since issue one. It’s definitely worth picking up, and I hope they collect it in giant sized hardcover like an an Authority Omnibus. 3.5/5 Bibles.

Second Coming has ended its initial run with issue #6, and this series has been an absolute, hilarious blast with a surprising amount of heart and pathos for a plot that could be boiled down to “What if Jesus Christ and Superman teamed up?” Creators Mark Russell (writer) and Richard Pace (artist) show a deep understanding not only of Christian and biblical lore, but also superhero lore itself, and have managed to successfully merge the two in a way that is genuine, sincere, and actually shows respect to both mediums, while not shying away from ultra-violence, or swearing (it is remarkable how staying true to the Bible results in gratuitous violence and nudity). God tasks Sunstar (the equivalent of Superman) with keeping an eye on Jesus, and to “toughen Him up”. Meanwhile. Sunstar and his girlfriend (Lois Lane surrogate Sheila) are traversing their own relationship problems before having a third wheel dropped in on them, and Satan himself is taking advantage of Jesus’s return to present one final temptation, while convincing God to end reality if Jesus fails to succumb to it. Here, with Sunstar incapacitated, Satan presents Jesus with his final temptation…and with genuinely surprising results.

The series itself found God allowing Jesus a second chance at coming down and preaching on Earth, only to find that the planet has changed considerably in the 2000 years since He left. And while society at large has grown up much more jaded and rough, perhaps in ways that are less discernible and obvious, it’s also stayed the same. The temptations are the same, only now, with 2000 years between appearances, His lessons and teachings have been subverted and used in callous, often selfish ways. Russell’s characterization of God Himself is a riot: angry, despondent, and impatient, God is here self-centered, a Father who can’t be bothered to be responsible for His children, His creation, or to face the fact that He perhaps just doesn’t care about any of it. He comes off almost like a drunk father toeing the line of abuse…which tracks surprisingly well with the Old Testament. He’s petty and disinterested and seemingly fickle (in a scene recalling Abraham’s faith, God almost blithely commands him, “I’m gonna need you to cut off a piece of your dick”, like it’s the most normal thing; or, following Jesus’s crucifixion, during a flashback: “Forgiveness? You call THAT a religion?!”).

Subversive, irreverent, and with a rather unexpected ending, this is one of the more surprising titles I’ve stumbled upon, and there’s enough respect (and introspection, and dissection) of the source materiel that it actually works as an exploration of biblical themes…from a critical angle, and not proselytizing, which I greatly appreciated. Don’t let the use of the Bible as a source of inspiration put you off (I’m not at all religious), but if you come in with at least a base understanding of Christianity (or Christian tropes in general), you’ll be surprised at how much you might enjoy this title. I know I was. Where this title goes from here is anyone’s guess, but I’m in it for the long haul. 4.5/5 Literal Bibles.

In a slightly stunning return to “The End” one-offs, Adam Warren and Chamba Cruz bring us Venom’s final battle and it isn’t the battle we thought it would be. The two “ends” that stick in my mind are the Hulk’s, and the Punisher. Hulk ends with him turning back to Banner one last time to let him die and then the Hulk gets his wish, to finally be alone; and with The Punisher, Castle finds himself in a nuclear holocaust killing one last bad guy before succumbing to radiation poisoning and seeing his family as he passes away. In both of these one-shots, the titular hero faces one more battle that we are used to, but in Venom, Warren takes us a different way.

We see a Venom that has kept Eddie Brock “alive” for centuries until he literally turns to dust. Earth, and the Milky Way, has been overcome by a techno war between the Phalanx and the A.I. of Tony Stark. Once those two entities join forces, it’s them versus the symbiote that is Venom. He then decides to reach into his codex to pull out the mutant powers of various X-Men to literally reproduce the galaxy. But here is where it gets even crazier: by the end, he finds out that he can create whole galaxies by ripping himself apart and re-starting the Marvel Universe 1 trillion years in the future. So Venom’s end is Marvel’s recreation. That’s it.

The writing is pretty clever, and I will admit that Warren did a great job of writing the issue in a witty and unexpected ways. I did appreciate that it never explains the connection between Venom and Eddie Brock, because you don’t really need that. The art by Cruz and colorist Guru-eFX is crisp and clear and vibrant and really beautiful. The issue is fun and entertaining, but I don’t think I’ll be going back to this one like I have The Punisher’s End. While I appreciate that this issue took Venom’s end in a very heroic fashion, but I think maybe a final battle with Spider-Man might have been maybe more dramatic and maybe there could have been more intriguing. But maybe that’s just me. 2.5/5 Bibles.

The original Question — Vic Sage aka Charles Victor Szasz — is back from the dead…only to awaken in Hub County, in the late-1880s. While issue one ended with Sage seemingly dead, this issue finds him considerably less stiff…at least until the end of the final page. Here, we get a better sense of what has happened to our duality-obsessed antihero. Hub County has no shortage of unsavory types, quick to judge and even quicker to violence, and Sage fits right in, trying to right wrongs in an attempt to find out if there is any good left in him, and a larger understanding of what is actually happening to him is slowly coming to light: someone called the Man With A Thousand Faces is either forcing Sage into the past at various points in history, or he is reliving past lives. As it is explained to him by a native seer, the Man With A Thousand Faces has existed for as long as humanity has existed, and only a specific someone named “Charlie” will end him.

Jeff Lemire once again brings a lot of psychological depth to the Question, with the art team of Denys Cowan and Bill Sienkiewicz once again knock it out of the park here. The art is harsh, moody, vibrant, and utterly alive; dreamy and jagged and as crisscrossed with lines as Sage’s mind is with doubt. The creative team is perfect for this title, and now that there’s a better idea of what the actual story is and where it seems to be going, the possibilities are growing. Next issue finds Sage in the 1940s, as a gumshoe, and if Lemire is content with showcasing the seedier sides of once-reliable and heroic genre staples, he could not have picked a better antihero than the Question.