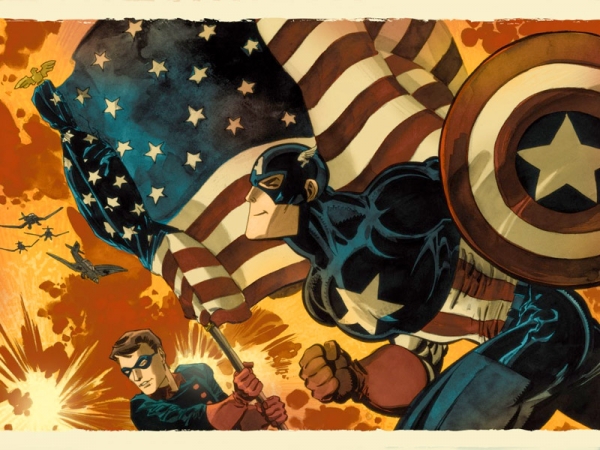 It’s the weekend, fellow geeks, so that must mean it’s time for our SUNDAY STASH. We’re taking a look some great titles this week, including the first 5-Bible score for 2015 from one of our esteemed reviewers.

So sit back, open up that bottle of beer, and let’s take a look at what the week is bringing us…

Yes. That just happened–in the pages of this week’s hottest comic, Tokyo Ghost #1. From Rick Remender (Uncanny Avengers, Venom), Sean Murphy (Teen Titans, Hellblazer) and Matt Hollingsworth (Batman, Challengers of the Unknown), this Ghost is one part Judge Dredd, one part Ready Player One and all AMAZING!

If you have ever sat at lunch and wondered whatever happened to simple conversation without the social media beeps, the iMessages — and whatever else your date is glued to while she ignores you — Tokyo Ghost is for you. The comic is set in a world where every issue affecting our world has been amplified to 1,000, and comes out as an artfully unabashed payload of glory.

Tokyo Ghost focuses on the “law” duo of Debbie Decay, and her boyfriend Led Dent, as they survive in a tech-obsessed world of Mad Max on digital meth. This first issue has our team of two chasing after the Jesus of murder himself Davey Trauma as he wrecks havoc through the city of Isles of New Los Angeles, and an ending that will have you waiting on baited breath for the next installment.

Remender may be the creative juice behind the storytelling, but without Sean Murphy’s artistic, incredible mix of heroin and art, this book may have fell on blind nerd eyes. After his superb run on Chrononauts, Murphy is again matched with a storyteller that allows him to bring life to a chaotic world of detailed landscapes, quick camera angles, hell-on-wheels, and Borderlandsesque oddballs.

Amazing that it took almost 9-months for the The Traveling Nerd to give out his first 5-Bible score of 2015, but surely this comic is the best read I’ve had all year. Buy it! Savor it! And you better damn well buy issue two. 5/5 Japanese Bibles.

There are a number of hotly anticipated events coming up in the world of comics; some of you are no doubt clamouring for multiple variants of Miller’s DK3, while others can’t wait for Gaiman to finally finish his volume of MiracleMan – but this book right here is the one I’ve been most excited for: Jeph Loeb and Tim Sale’s Captain America: White. And now that it’s arrived, it’s everything we could have hoped for.

This superstar artist and writer team, most famous for their seminal Batman series The Long Halloween (though I still have a lot of love for their Wolverine/ Gambit: Victims mini-series from the year before) reunite once again to delve into the depths of Marvel’s canonical mythology to deliver another stirring and beautiful soliloquy that cuts to the very heart of these great Lee and Kirby (and Joe Simon, in this case) characters.

Echoing the sombre tone of Daredevil: Yellow, and the sense of loss that pervades the incredible Spiderman: Blue, Loeb (also Heroes, Hulk: Gray, Batman: Dark Victory, etc) once again delivers a finely crafted and noir-ish tale, this time giving due weight to Steve Rogers’ situation post-thawing, whilst recalling an earlier mission in the heat of wartime with the ill-fated Bucky by his side. Sale delivers the same gritty, stylised, dynamic, brittle, hopeful, and brilliant artwork I’ve been consuming ravenously since his days on Grendel; assisted ably here, as usual, by the multiple-Eisner award winning colorist Dave Stewart (BPRD), giving textured and bright pastel tones throughout.

That this book is a delight to look at and read was never really going to be in question. The only question is: Why have you not bought this book already? Quick! Go Now! There’s probably still time before the comic shop closes. 5/5 Holy Scriptures. (We don’t give every comic book a 5, we promise!)

Fighting crime and being a superhero can cost money. But what if you don’t have the money to fund your project and instead have to borrow it or take out a loan? What if you don’t make your payments? That’s where The Paybacks come in. Defaulted on your loan? They are here to repo the goods, even if that means your entire vigilante arsenal.

Written by Donny Cates (Ghost Fleet, Buzzkill) and Eliot Rahal (Doorman, Archer & Armstrong), drawn by Geoff Shaw (Buzzkill, A Town Called Dragon), and colored by Lauren Affe (Five Ghosts, Buzzkill), The Paybacks brings a great twist and shows another side of the super hero life. I was smiling ear-to-ear right from the start, and laughing within a few pages. Hell, it had me giggling from a quote on the cover. Both the writing and artwork are great, making the characters edgy and badass while still showing a comedic vibe. You can bet this Saint is definitely keeping this comic on his subscription list. 4.5/5 Repo’d Bibles.

In the past few months, I’ve read and reviewed a few different first issues. This might be the best one. While Cyborg, and the Secret Wars, tend to be MUCH cooler, as a first issue, Voltron: From The Ashes more than meets the requirements.

As always, quality artwork is a priority. I mean, it’s a comic book; if the art wasn’t important, why not just go read a novel? With that said, Voltron nailed it. Blacky Shepherd’s illustration brings forth the Voltron vibes we all know and love from back in the day. It’s good to see the legacy of Voltron preserved in the lines, with the refreshingly modern and expert level coloring from Adriano Augusto (Red Sonja, Green Hornet) sprinkled on top to perfect the beauty.

The story side of this issue was perfectly executed. A complete balance of elements with none of it feeling forced or remedial. There is dialogue, back story, action, and narration–none of which sits separately on its own, nor broken down in a way that makes it feel like it doesn’t fit. From Haggar, to the Robeasts, to the elders training new pilots, it all fits together and flows seamlessly. The action keeps you engaged, the narration keeps you informed, and the backstory is worked in through both of those elements so you never feel lost by introduction of the characters.

With most first issues, I finish with the feeling that writers just wanted to get all the boring introduction/explanation stuff out of the way so they can go crazy with the next issue and not have to explain much. With Voltron, they have instead explained everything through an engaging, well written story. The beginning grabs your attention with a bit of mystery, the middle is action-packed, and the end leaves you excited to see what happens next. Bravo, Sir Voltron. Bravo. 4.25/5 bibles