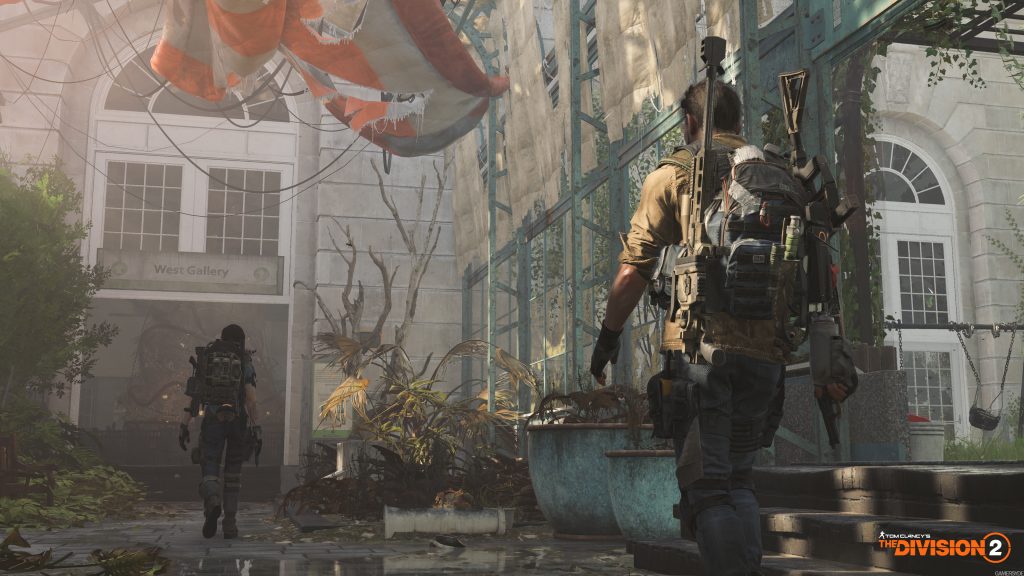 Despite being a long-time PVE player, I wasn’t exactly excited for my behind closed door time with Tom Clancy’s The Division 2 — a series I had only tried but hadn’t clung onto. E3 is over and now I’m a fan.

GHG — Artez, Moody and me — was given a good 30-minutes plus to play 4-player co-op in the same Washington, DC demonstration from the Microsoft press conference. Everything about the controls felt great, although heavily complicated if you hadn’t touched the first; gunfire and special weapons were easy to handle, unique, and addicting to test as we traversed our mission through the state capital and the barren wasteland surrounding it. Much like Manhattan in the previous game, Massive and Red Storm plan to recreate a 1-to-1 ration of Washington. Comparing this environment to that of the DC we’ll see in Fallout 76 and The Walking Dead action game will be interesting.

If you watched the demo, you were probably just as blown away seeing a crashed Air Force One aircraft and monument museum (infiltrated by the True Sons enemy faction) as we were in our run/communicate/shoot/cover hands-on. While not much is known on how the story campaign will play out, the most RPG elements I saw dealt with gun Specializations. Once you equip these special weapons (level 30 = very deep into gameplay) — powerful crossbows, grenade launchers, hive drones, 50-cal snipers, etc. — The Division 2 goes from your standard tactical shooter into something quite rewarding. When the tough gets going, you can also call on a group of NPC’s to get your back during a firefight.

The rest is a mystery. Eight-player raids were announced at the conference, yet nothing concerning PVP (i.e. The Dark Zone from D1) was shown. PVE is very solid, and that’s only the half of it. With another Tom Clancy franchise gamers care about, let’s hope The Division 2‘s hype (come March 15th) feels worthy to the faithful community and new players alike. 3.5/5 Bibles.