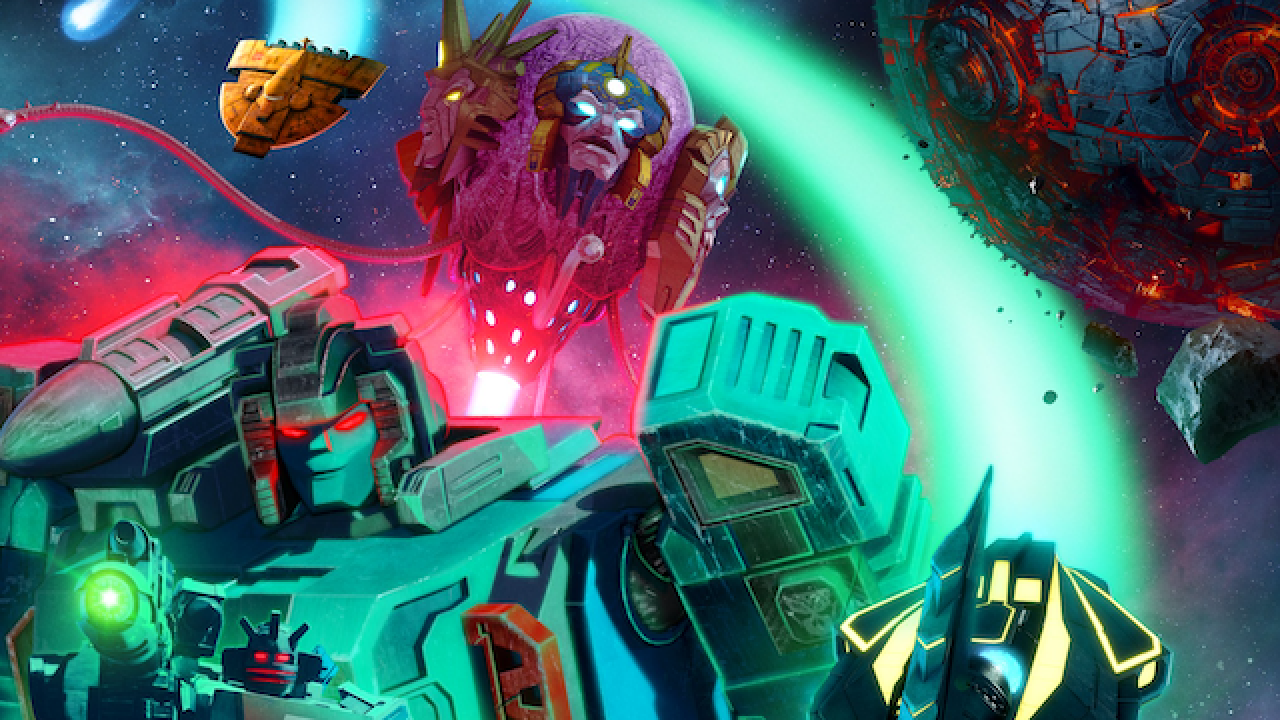 Netflix drags us across the universe for the sequel to Transformers: War For Cybertron – Siege. WFC: Earthrise appears to be a huge misnomer, however, as Earthfall would have been more appropriate. There is only one Earth scene — leaving us with more assumptions than answers…

Earthrise‘s episodes clumsily juggle time between time on dying Cybertron, Space, and the Dead Universe. The Dead Universe feels like the Negative Zone but might just be the fiery dump hole for our Man Child G1 memories. Those scenes were the most nostalgic and prompted various “OOOH” moments. This review is written from dual perspective because I watched it with my son who is 9-years old but very well versed in G1 Lore, having watched the ’86 movie and every episode from the Ark Landing to the Headmasters and Grimlock getting a brain and creating Combiner, Computron.

My favorite “thing” about Netflix Transformers is that it makes me want to buy more action figures, especially the figures I didn’t want like Cog, Bug Byte, or Six Gun. That was the premise in the 80’s– to sell Toys: Masters of the Universe, G.I. Joe, Thundercats, etc. It seems safe to presume, name dropping a bot, that has already released on Walmart or Target, isn’t a spoiler. Earthrise actually shows what a sick and sinister bot Shockwave (Todd Haberkorn) is. He was pretty ill in Siege but his performance here in Earthrise convinced me to want to buy a Shockwave figure, even though he only transforms into what looks like an Asthma pump. Who cares Shock’s Alt-mode after this series!

Elita-1 (Linsay Rousseau) continues to be a bad ass. Red Alert (Haberkorn again, pulling double duty) is even cooler. Shockwave’s intentions are clearer in this series than they were in G1 and he’s quite sadistic. He steals the scenes on Cybertron. The Quintesson in Earthrise proves to be more formidable than it was in G1. The Dead Universe alludes to some 1986 moments that had my son and I turn to each other in amazement. Bumblebee’s (Joe Zieja) progression into Autobot ideology is cool.

But here’s everything wrong, sans spoilers. My son and I couldn’t accept Doubledealer’s (Michael Schwalbe) babyface. He looked straight out of the Lego movie and so did Megatron’s visitor in the dead universe. Transformers with rounded features just doesn’t look right especially when they’re villains. There weren’t many transformations. Many transformers didn’t transform; if you’re going to introduce a transformer, can we at least see an alt mode? There’s some temporal issues where it doesn’t seem moments passed and the action appears sudden during an Elita rescue scene. The back and forth of Optimus not killing Megatron when he gets the chance gets annoying.

Then there’s the voiceover work. Optimus Prime (Jake Foushee) and Megatron (Jason Marnocha) have the classic gruff of Peter Cullen and Frank Welker, but beyond the slight resemblance, the quality gets really sloppy. It seems as if they didn’t try at times. The cell-shaded animation via Rooster Teeth isn’t always clear either, as we never see the ark crash to Earth, only ship bits, and then see the Ark.

Then there’s the handling of the ultra impressive-looking Scorponok (Michael Dunn), whose origin is very unclear, while Sky Lynx is an interesting character whose capabilities were fully displayed. Earthrise‘s ending is also incredibly abrupt and unsatisfying. We are left with so many questions we hope are answered.

In the meantime, I’ll preorder a third-party Shockwave that still transforms into a Laser Gun. 2.75/5 Bibles.