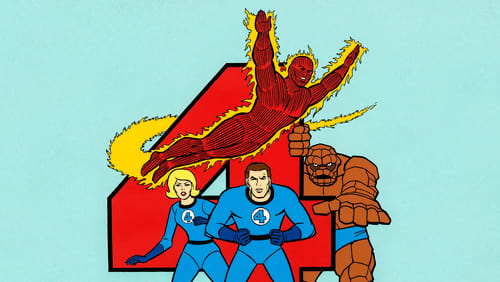 REED: We four have been invested with the powers of the universe! More power than any other four people on Earth! With this power properly controlled and applied, we four could aid and do good for all mankind! And so, to fight tyranny, I put out the hand of Mister Fantastic!

JOHNNY: And against crime, The Human Torch! (FLAME ON!).

SUE: Against evil, The Invisible Girl!

BEN: And against greed and all the rest, THE THING!

Finally, we will discuss the most unique entry of the bunch as it is the only one based on an actual comic book property: The Fantastic Four.  Published by Marvel Comics and debuting in The Fantastic Four #1 in November 1961, the quartet of heroes was created by Stan Lee and Jack Kirby. Marvel publisher Martin Goodman was made aware the sales of DC’s recently released book Justice League of America and how superheroes. With this information, Goodman went to head writer Stan Lee.

Lee recalls the initial creation:  “Martin mentioned that he had noticed one of the titles published by National Comics seemed to be selling better than most. It was a book called The [sic] Justice League of America and it was composed of a team of superheroes. … ‘If the Justice League is selling’, spoke he, ‘why don’t we put out a comic book that features a team of superheroes?’ (Wikipedia, ‘  Fantastic Four”) At this point,  Lee was already a 20-year veteran and fed up with comics. On the verge of leaving the industry, Lee was convinced by his wife Joan to create a comic that he would enjoy reading himself. With the Fantastic Four, Lee decide to break all the comic book rules. Prior to the Fantastic Four, most superheroes were cookie cutter do-gooders with no distinct personality about them. With Stan, they got emotional problems, financial and relationship issues and, at certain times, they would be hunted by the people they will be sworn to protect. To quote Robocop screenwriter Michael Miner, ‘Stan Lee created the superhero with a headache’. Lee went to head artist Jack Kirby and they used another Kirby-created group as the basis: DC Comics’ Challengers of the Unknown.  Kirby notes this in an interview:  “[I]f you notice the uniforms, they’re the same… I always give them a skintight uniform with a belt… the Challengers and the FF have a minimum of decoration. And of course, the Thing’s skin is a kind of decoration, breaking up the monotony of the blue uniform.” (Wikipedia, ‘  Fantastic Four”) .

With the immediate success of The Fantastic Four, Lee and Kirby that ushered in the Marvel Age of Comics.  The FF were soon joined by other creations like The Incredible Hulk, The Amazing Spider-Man, The Avengers, The Uncanny X-Men and more.  Having conquered comics, the team at Marvel decided to conquer the medium of television. Grantray-Lawrence Animation had already produced a syndicated cartoon called “The Marvel Super Heroes” Unfortunately, its limited animation did not do Jack Kirby’s artwork justice.  Fortunately, The Fantastic Four was developed by Hanna-Barbera and benefits from the Hanna-Barbera production pipeline and redesigns by artist Alex Toth. Most of the episodes are detailed recreations of the classic Lee/Kirby stories with comic villains like Klaw, Blastaar, The Mole Man and The Super-Skrull. The Fantastic Four series is the best looking of any of the other Marvel Comics cartoons of the time. Also, after a number of flop movies and cartoons to their name, this cartoon remains the purest multimedia  representation of The Fantastic Four to date.

Debut: September 9, 1967 on ABC :  After being exposed to cosmic rays during an outer space test flight in an experimental rocket, four civilian astronauts all gain super powers and become The Fantastic Four, a world famous group of explorers/adventurers. Operating out of their skyscraper HQ, The Baxter Building, The Fantastic Four have no secret identities and enjoy celebrity status from their scientific and heroic contributions to society.  Their members include:

NOTE:  Sue’s invisibility is illustrated in the exact same way as Space Ghost 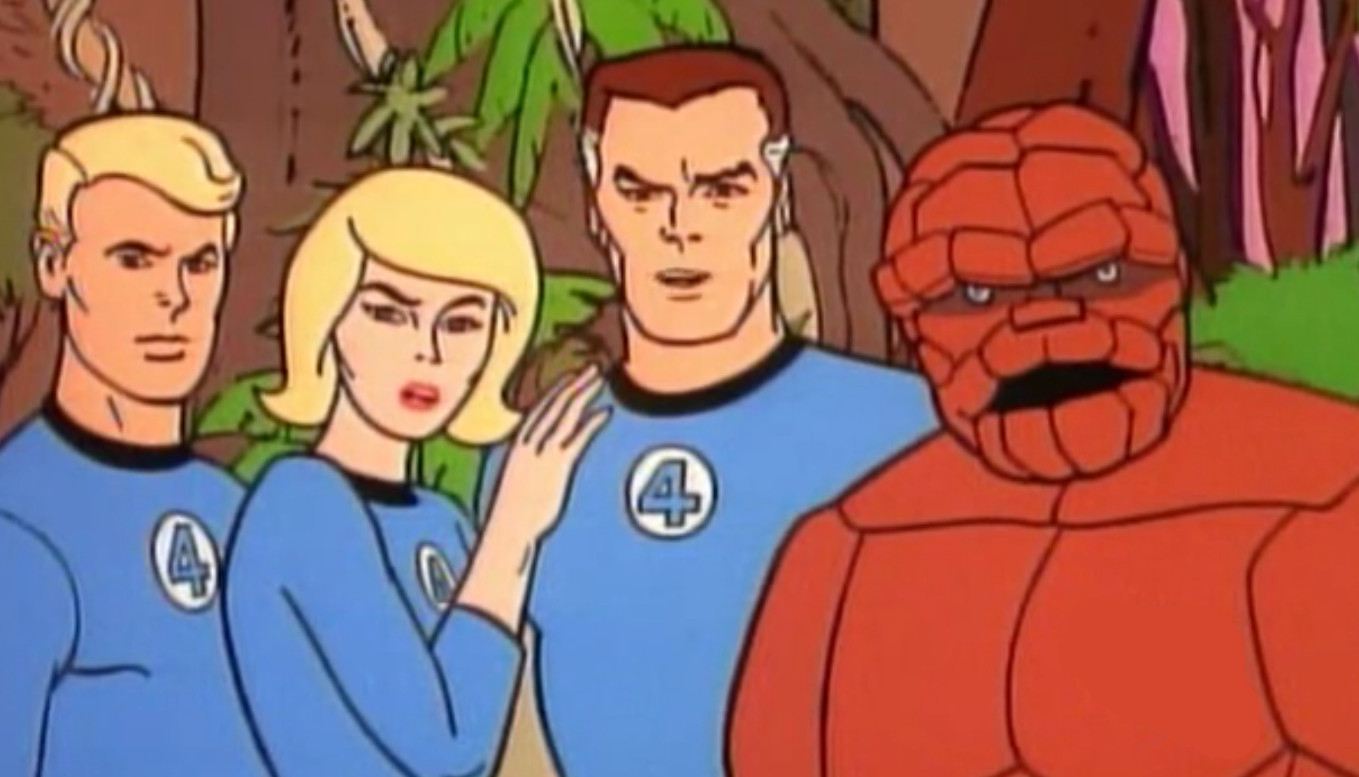 Three episodes of the series deal with a character that has been a friend and enemy during the FF’s early years: Namor The Sub-Mariner. Like Thor, Namor was one of the heroes that headlined a segment of ‘The Marvel Superheroes’ show. As such, he could not be used in any of the Hanna-Barbera properties. So, Hanna-Barbara created three original characters to take Namor’s place in each story.

Namor Replacement: Dr. Gamma/The Gamma Ray. An evil Asian scientist whose island fortress and its secret weapons are blown up by the FF. Gamma’s radioactive weapons contaminate the seabed and Dr. Gamma is infected by the radiation while escaping. He turns him into a big purple creature with a fin on his head and gains the ability to breathe underwater. He could also shoot electric bolts from his hands. With this new appearance, he proclaims himself ‘The Gamma Ray’.  NOTE: Giganto is a monster from the comics that Namor controls with The Horn of Proteus.

Namor Replacement:  Prince Triton. Depicted as a noble and handsome ruler, Prince Triton is the blue-skinned ruler of Pacifica (Hanna-Barbera’s substitute for Atlantis).  NOTE: Lady Dorma and Attuma are both characters from the comics.  Lady Dorma was, at one point, Namor’s wife while Attuma is often seen as Namor’s archenemy. Also, Marvel already had a character named Triton as a member of The Inhumans. However, this Triton( while also water-based) had green skin, scales and fins.

Namor Replacement:  The Imposter.  A villain not unlike Spider-Man baddie The Chameleon, The Imposter uses a special device to emulate a person’s appearance, voice and mannerisms. NOTE: In the comics version of this story, Namor uses some undersea treasure to purchase a movie studio (SM Studios) for the sole excuse of taking his revenge on The Fantastic Four.

The Fantastic Four has yet to be released on DVD, mainly because of some legal chicanery. The majority of Marvel’s 1960s-1990s animated cartoons are owned by Disney.  However, the  1967-1968 Fantastic Four  series was produced by Hanna-Barbera, which now owned by Warner Bros. This makes the series one of the rare Marvel-related TV projects not owned by Disney.

Fred and Barney Meet The Thing:

Just as the superhero cartoons were gaining steam, they all ended abruptly.  After the assassination of presidential hopeful Robert Kennedy in June 1968, parental groups, media outlets, and elected officials started to express their concerns over the amount of violence on television. A point of interest became violent programs aimed at children.  As a result, the Hanna-Barbera superhero lineup didn’t receive additional episodes for the 1968 season.  Hanna-Barbera cut their losses and switched back to cartoon comedy with shows like Scooby-Doo.  In the 70’s, Alex Toth’s last contribution for Hanna-Barbera would be as the designer for their new kid-friendly version of DC’s Justice League, The Super Friends.

Recently, all the major Hanna-Barbera superheroes returned in comic book form during the massive DC Comics crossover, Future Quest.   The comic has proven to be a hit and we can foresee the Hanna Barbera superheroes are back and better than ever! Until Next Time….

McMillan, Graeme. FEBRUARY 23, 2015. The Secret Life of the Other Birdman.  The Hollywood Reporter.