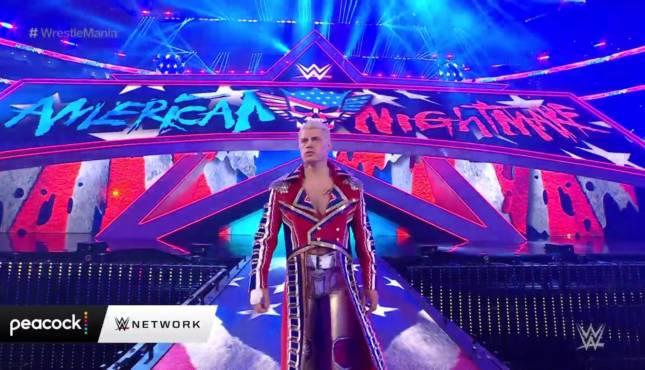 It’s finally here!! The grand-daddy of them all, the show of shows, the “showcase of the immortals”!

Or is it Sports Entertainment Mania now? I don’t know.. but this weekend has been wild. I’ve consumed more wrestling from my home than any human ever should in a single weekend.  Anyway, Mania is now a two-night extravaganza. By the way, this company that everybody hates sold over 70,000 tickets, which isn’t too shabby for a shitty company that nobody likes anymore.

But enough trolling the IWC, they’re going to be in enough tears when Shane-O-Mac shows up as Seth’s opponent tonight. That said.. there was absolutely no need for a two-hour kickoff show with zero matches– especially when the US and Intercontinental titles aren’t even on the card. Damn you, Vince!! Anyway, let’s pour a glass of whiskey, sit down and take in the biggest show of the year. It’s time for WrestleMania 38, Night 1!!

Damn, do they misuse Shinsuke. This match was a lot shorter than it should have been. Boogs blew out his knee and left Shinsuke to fight the Usos, two on one. Nakamura got off a few good moves in but it was basically a handicap match the rest of the way and a 1D put Nak down rather quickly.

We found out later on that Boogs’ injury was real. He tore his quad and damaged his patella and needs surgery.  I mean, that would explain how the remainder of the match went and why it ended so quickly. If this is a sign of the night to come, I might need to crack open the good whiskey. – 2/5

Wait… did Samantha Irvin just call Happy Corbin undefeated? Come on. Sure, he hasn’t lost since his “name change” but that doesn’t constitute undefeated. I love that Pat McAfee called him Bum Ass Corbin before he changed his name. Corbin looked strong to start this match. McIntyre doing a tope suicida was pretty insane.

This one was a slight step up from the opener but not by much. Corbin is no longer undefeated and this match felt like it belonged on SmackDown or the Kickoff Show. Which, by the way, why was this match here instead of Ricochet defending his title? Who booked this shit, Bruce? Oh great, McIntyre destroyed the ring ropes so the next match is going to take a bit before it happens. Time for more whiskey. – 2.75/5

HOLY SHIT!!! LOGAN PAUL IS FRICKIN GOOD!!!! Give this kid a damn contract. This was the best match so far tonight and it shocked the world. Logan pulling off the Three Amigos AND a GREAT Frog Splash with a little shoulder shimmy on the top rope!! I don’t like this kid at all, but I have to give him credit. He did a bang-up job. Logan Paul looks better than Dominik, to be honest. Logan Paul may be the greatest sports entertainer ever.

Anyway, this match might be the turning point of the night. After the match, Miz turning on Paul just set up his first feud if they keep him around. I’m sure we’ll, at the very least, get Miz versus Logan Paul at Backlash or SummerSlam. This felt like Mania to me. The other two should have been in that horrendously long kickoff show. THIS started the night of Mania. – 3.25/5 Stephanie McMahon comes out and introduces Gable Steveson to us. So, the Olympic Gold Medalist will NOT be the swerve on us to face Seth Rollins. Has Shane been seen in Dallas? Hahaha. Interesting that this kid is getting the bump directly to the main roster and skipping NXT. I guess that’s what happens when you win a gold frickin medal WITHOUT a broken frickin neck. Can’t wait to see what this kid brings to the table.

Here we go with the over-the-top entrances finally. That marching band. Fire. OK. We’re definitely at Mania now. These two women put on a hell of a battle. If you’re looking for good women’s matches to watch this weekend, this might be the best of them. This will be on my list for the women’s match of the year. The entrances also set the stage perfectly for the culmination of this feud.

Bianca had her WrestleMania Moment stolen from her last year by a returning Becky Lynch and this year she recaptures her moment. Great match overall and almost the show-stealer. If they really wanted a women’s match to be the main event tonight, they should have gone with this one. – 4.25/5

So, after much speculation, rumors and to-do, we finally find out who Seth’s mystery opponent is going to be. Seth gets sung in by a chorus. That was weird. And Cody Rhodes came home!! So, we have our first impactful cast off from AEW that lands in WWE. Not saying it means anything, but I would take note: This was a great wrestling match. Cody may have just had the match of his career with Seth Rollins. Definitely Match Of The Year contender right here. He even got a little homage to Dusty in there. Now let’s be real. Cody needed this. This was the only way this comeback would have worked.

I know everyone always looks at what Vince does wrong but they forget about what he does right. Sometimes you need to go away and prove yourself somewhere else to get the push. Remember the Chosen One, Drew McIntyre, or Christian? They proved themselves and then came back and went to the moon. Now, I don’t know that that’s the plan here but don’t doubt it until it gives you a reason to. I mean, we might have just witnessed the greatest WrestleMania Moment in the history of WrestleMania. Cody came home. Holy shit! – 4.5/5

This match was done a disservice for coming after Cody’s return. It was kind of sloppy. I don’t know if it’s Ronda or if Charlotte just isn’t really at the level that WWE puts her at for her name. Logan Paul looked better than Charlotte Flair. They had their moments, don’t get me wrong, but after the last two matches, it just wasn’t the same.

It picked up and got a lot better but the first half was pretty rough. Ronda got out of the Figure Eight and kicked out of a Natural Selection. Neither woman would tap. The ref got knocked out and it cost Rousey the title in a fuck-finish. We couldn’t go the whole night without one right? Of course, it was in the main event. I should have gone to bed before this match. Overall, it wasn’t the worst match but compared to the two that preceded it, this was meh. – 3.5/5

The big question was, would this turn into a match? I mean after the actual main event I went in HOPING it would save the main event. Luckily for us, it did. And no holds barred at that. It was great to see Austin back in the ring. Austin drank beer and stomped mudholes. They went out into the crowd and up the ramp and Austin took some bumps that I never thought I’d see him take again. This got the crowd back into it to end the night. Both men ate Stunners and Austin came out victorious in the end.

After the match, it was time for beers, beers and more beers followed by another Stunner for KO. And just when you thought it was done, Stone Cold shared a beer with Byron Saxton and Stunned the hell out of him then celebrated with his real-life brother. This is how you send the crowd home happy and buzzing in Texas. And there’s still one more night! Can night two outdo what we just watched? – 4/5

Above all, Mania’s first night really didn’t disappoint. Clearly, it started off slow and really bumpy, but it slowly reached true Mania level. In the end, we got an amazing Mania Moment recaptured for Bianca and one for Stone Cold and KO that the entire arena enjoyed. In addition, Logan Paul shocked the world because he’s actually pretty damn good at this. And of course. “the greatest WrestleMania Moment in the history of Mania” came with Cody Rhodes returning home. Hopefully, Rick Boogs heals up quickly, but what happened to the New Day versus Sheamus and Ridge Holland? Guess they got the bump. Maybe on the night two kickoff show? They could use a match or two on that two hours of nothing. In fine, I thoroughly enjoyed night one of WrestleMania and will be looking forward to night two. Now, more whiskey.