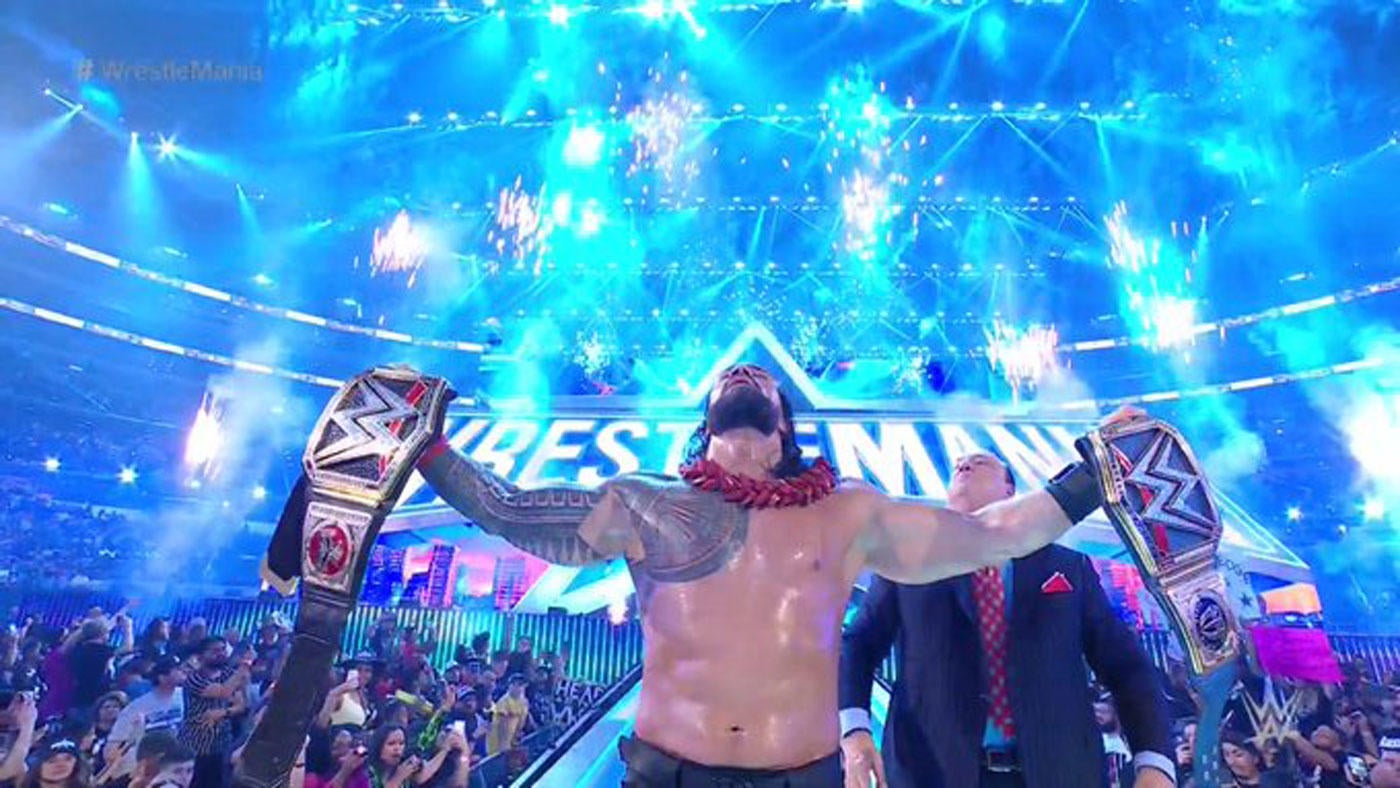 Welcome to Night Two of the most stupendous night in SPORTS ENTERTAINMENT HISTORY!!! WRRRRESTLEMANIA!!!

I’ve got a few thoughts on Night One, but, for more detail of Saturday night, please do check out Shawn Puff’s full review…

-What. The. Fuck. Logan Paul is a natural. Hate, hate, hate to admit it, but he’s a great natural heel. He knows how to work the crowd, the camera, does smooth work in the ring… He’s sure as hell better than Cody’s Tat.. Sorry, I meant Dom. And the Miz? Icing on the cake.
-It’s so weird that the End of Days had remained unbeaten and they decide to throw that way in a “nothing” match.
–Bianca and Becks went hard. And I’m tired of Becks. Hats off.
–Cody. Amazing return and possible MOTN (I’m torn between them and Bianca vs Becks).
–Charlotte and Ronda? Basura, basura, basura. Bullshit finish because God forbid Chars doesn’t win a PPV match. Wish they had cut this instead of the New Day match.
–Stone Cold can still go hard!!! Has better stamina than some full timers, goddamn!

Onto Night Two. Ready to Acknowledge… 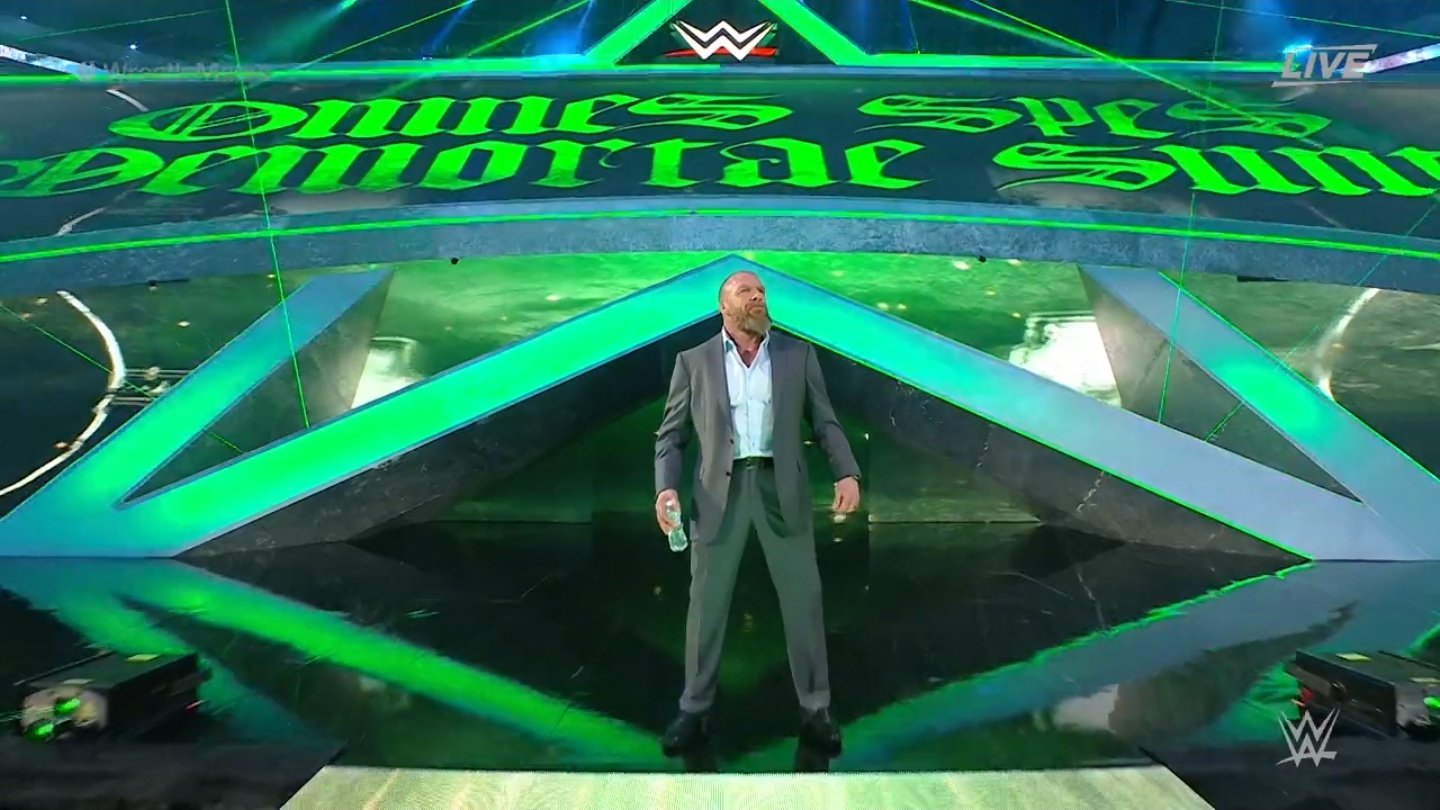 We open with Triple H having a nice little intro moment. I’m not crying, you’re crying. He kept things short and (too) sweet.

I’m in the unique position of being both pretty entertained and underwhelmed. It just feels like they always do too little with Gable. He’s a surprising, deceiving powerhouse and it was awesome when back in the day, they’d let him go on a suplex rampage on guys way bigger than him. Yet again, it didn’t happen. Kudos to Otis for doing the first ever Judas Effect that actually looked devastating. I expected more spots in this good match, but it was not stupendous. – 3.25/5 (The Stevenson suplex thing was so mind-numbingly stupid and unnecessary.)

“Laaaashley! Laaaashley!” I don’t care. I liked the Lashley/Lio pairing. Anyway, where’s MVP? I was more invested in this match than I care to admit. Build up was short, but something about how it was put together just worked for me. I know Omos is not Taker or Nash; but, this brawl should’ve lasted longer and it should’ve taken more than one spear to get the win, especially with how they’ve built up Omos. He didn’t even have to kick out of the spear, just have Bobby do two or three in a row for insurance. Not stupendous at all. – 2/5

Didn’t know what to expect. We knew Johnny could take a ridiculous amount of punishment and that definitely counts for something in wrestling. Just ask Mick Foley (don’t @ me). What I sure as hell didn’t expect was to unironically love that match. I fully recognize that it helps if you’re a fan of Jackass (a lot) or just being a sadist (a lot), but that was great. I was thoroughly sports entertained!

Knoxville and crew were clearly game for taking shots and Zayn didn’t shy away from anything either. The nods to the Jackass shows and movies were brilliant. Anyone else surprised they went through with the Party Boy appearance? First STUPENDOUS match of the night. – 4/5 (Before you start whining, I’m not calling it a great wrestling match by any means, but it gets a 4 by sheer entertainment value.)

Why did Naomi get in the car to ride for 40 feet? I honestly don’t have much to say about this one. Nothing bad to say, and nothing to rave about. Love that Liv/Rhea finisher, though. Match was mid– not STU. PEN. DOUS. – 2.5/5

I’ve never been an Edge guy, never will be. It doesn’t help that they have him on a PPV winning streak… Match was fine but ugh. Edge wins. – 3/5, I guess.

Cole just called the team of Bitch, Botch, and Butch the Unholy Trinity. Calm down, Cole. You’re not talking about the Ministry of Darkness. That was so fucking stupid. Honestly, they should’ve just left the whole thing cut. It was a complete disservice to Woods, E, and Kofi. Fuck this and whoever produced that match. – 1/5.

I was looking forward to this match between Pat and Austin (not Steve) more than I’d like to admit. Hey, I feel they handled the build up well, what can I say? Match was a lot more fun than expected and McAfee impressed a lot of people. Ending was predictable, but didn’t take away from how enjoyable it was. – 3.5/5… Wait, what the hell is happening?

Pat McAfee vs. Vince & The Battle of the Austins – What a weird ride. The Vince match was clearly an odd ego project of his. It was surreal, and I’m sure people felt it was a mass hallucination. Thankfully Stone Cold snapped us back into reality and we got both one of the best and worst Stunner sells of all time. I genuinely don’t know who had the best rub of WrestleMania weekend: Theory or Owens. I consider this a segment, not an actual match…

Our Tribal Lord vs. The Mayor of Suplex City. Soooo what just happened? With the epic build-up and history between these two, I was expecting a way longer match. Don’t get me wrong; I thoroughly enjoyed what they did put on, it just felt like the finish came way too suddenly. I’ll wait to see if there are any reports of an injury because something feels really off. Hate to say this match was good but not stupendous. – 3/5.

Night 1 was better than Night 2. That’s pretty obvious. They shit the bed with New Day and the main event was painfully too short, a pity because it was shaping up to be (one last time)… stupendous.