Here are the Top 4 WrestleMania Weekend Shows from Thursday, ranked in order! 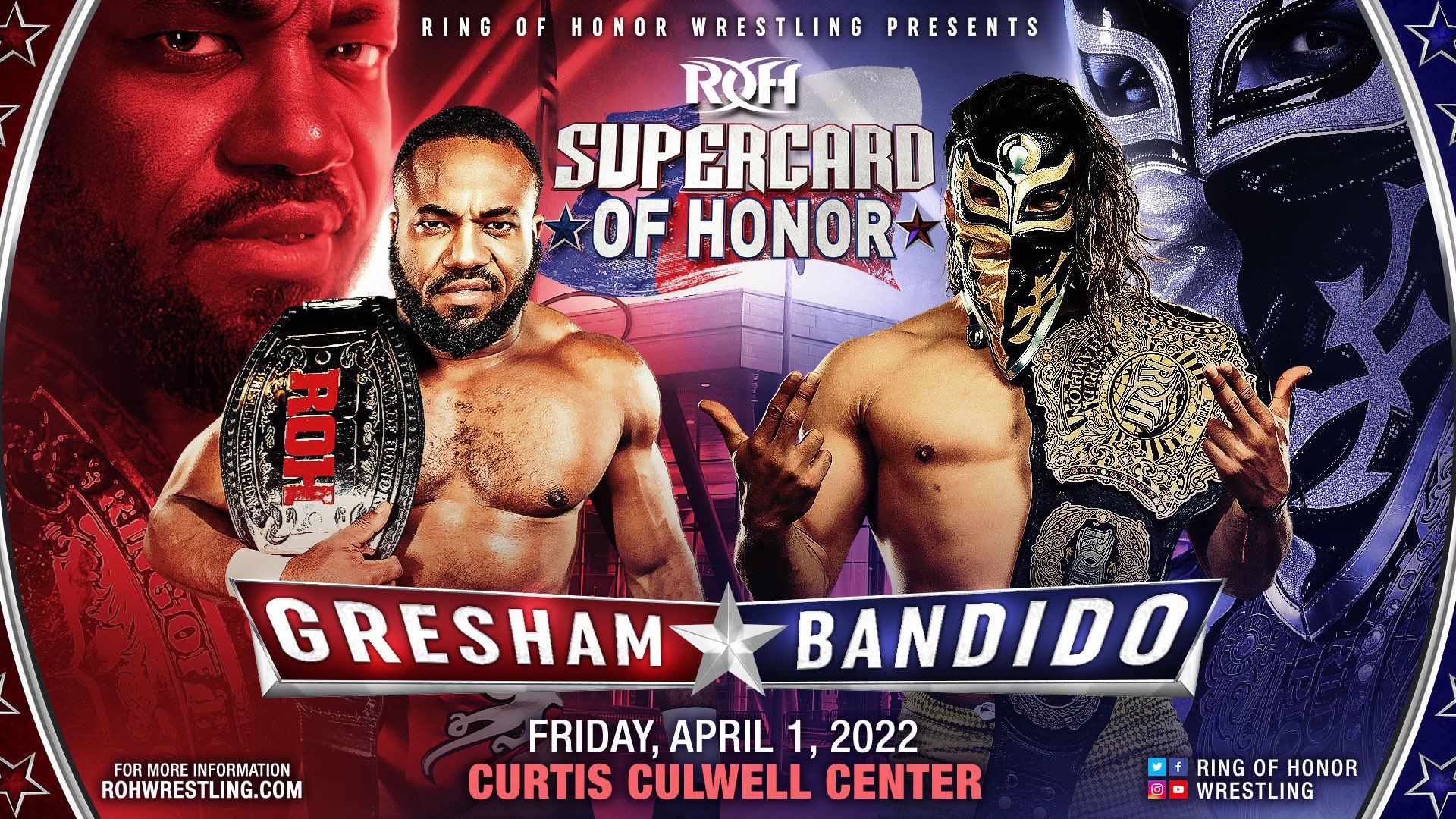 –I mean.. almost everything. From the last minute buzz created for the show, to the tremendous crowd, to the front-to-back match quality, to the big surprises — Brian Cage! Young Bucks! Samoa Joe! (“Joe! Joe! Joe!”) — to Tony Khan’s AEW imprint smothered all over the show, this “new beginning” for the Ring of Honor brand is off to a hot start. There are a lot of questions to be raised, sure, but let’s enjoy this event for what it was– maybe the best thing we’ll see all weekend.

–ROH World Tag Team Championship: FTR vs. The Briscoes – The match that sold tickets, the match that had all the hype, the match that had a bit of controversy for one team and a clear second start for the other. The ROH tag title match was everything it intended to be and more, and don’t be surprised if this winds up the match of Mania weekend. GO SEE IT NOW! – 5/5

–The TK post event media scrum. I love these. I guess that makes me a mark, but if you’re reading this then you clearly are one too. FTR was so damn amazing in the post show press conference, while Samoa Joe added a little kayfabe, and Mercedes proved she might just be “the realest in the room”. How you doin? I’m feelin’ good. 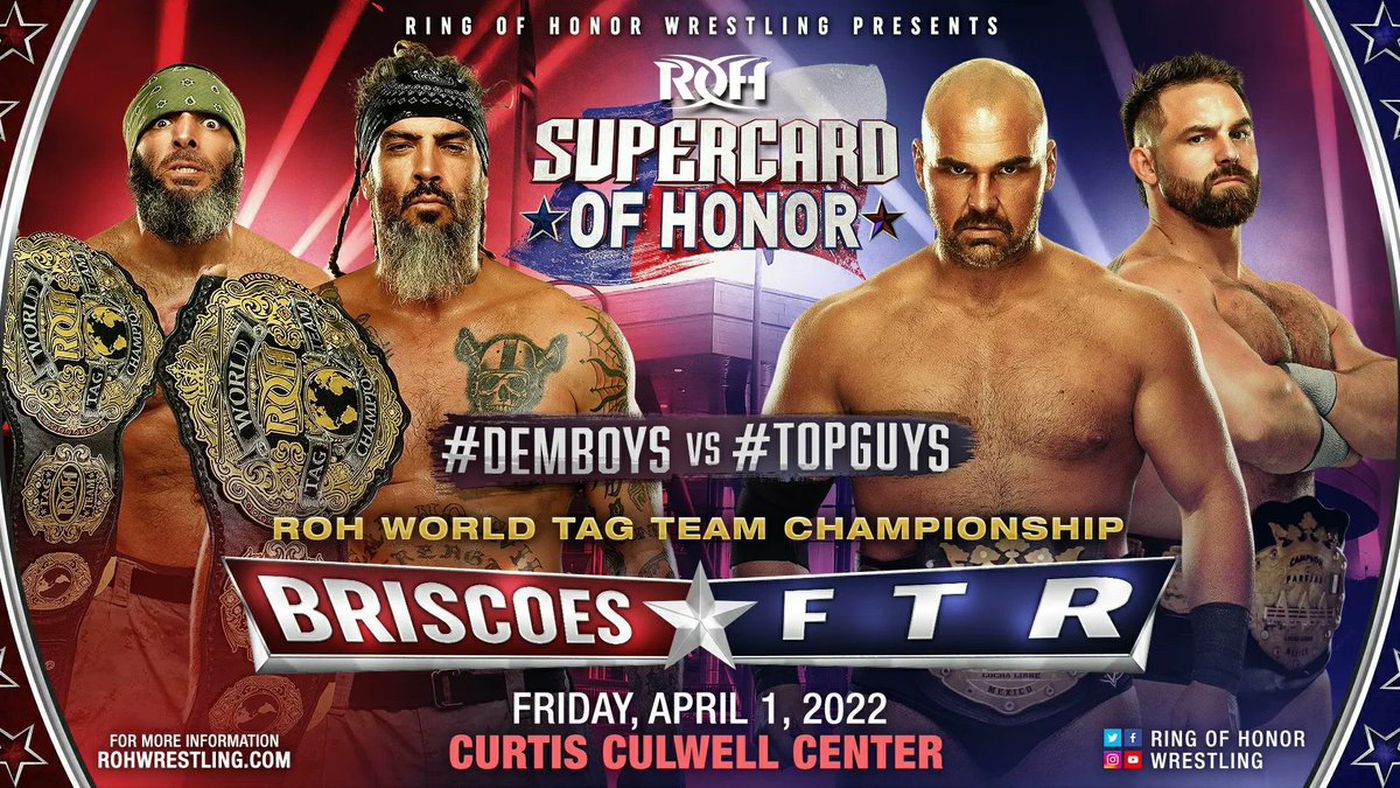 –Nothing. If we want to get nitpicky, the women’s matches didn’t exactly tear the roof off; then again, Women of Honor has always (sadly) been ROH’s clear-cut weakness. Mercedes is a great choice to be new champ, even if it’s in the interim while we figure out a time and place for her and Deonna to get it on, while A.Q.A. & Willow both show a lot of promise.

–ROH World Championship: Jonathan Gresham vs. Bandido – Oh, don’t get me wrong: this was a very good main event on a very good pay-per-view. I’ll even bump it up a 0.25 score for all the amazing action that happened after the final 3-count. While a “styles clash” of sorts, both competitors indeed adapted to each other as best as possible and it made for an exhilarating final 5-minutes. But we’ve seen better from both, especially Bandido the day before and Gresham in various matches all over the place. I’m intensely curious to see where all of this goes, be it Gresham’s whole deal with Lethal/Joe, or Bandido’s current status with ROH/AEW.. So, while I have this in the “bad” category, a whole lotta good came out of a slightly disappointing title match. – 4/5 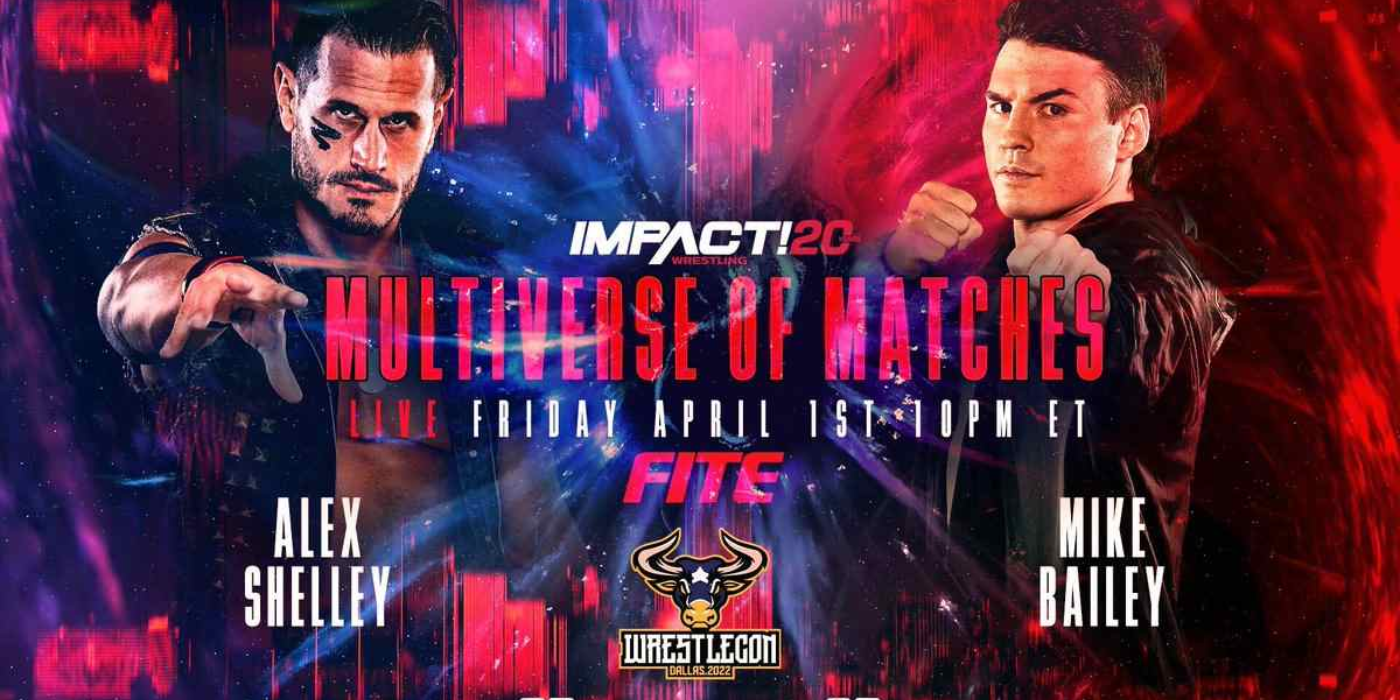 –The Card. It’s in the name– wrestlers from all corners of the “Multiverse” come together to celebrate the fact that Impact Wrestling is still a thing, no matter what promotion they’re representin’. While I haven’t been the most loyal fan of the brand over the years — returning many moons later to when Killer Kross and Bobby Lashley made it a thing again, mostly led by the hands of Sami Callihan — this event’s card piqued my interest. (Speaking of which, isn’t it kinda crazy having a WrestleMania/IndieMania Weekend without Sami? Without CZW? I remember them holding some pretty serious weight over the years.)

–Motor City Machine Guns. No, not together. Both Chris Sabin and Alex Shelley had the two best matches of the night, on a somewhat loaded card. With a somewhat stacked deck, that’s a clear testament to their ability to stay in shape, stay relevant and stay great in that squared circle.

-Their opponents: Jay White‘s frequent trips to the Impact Zone and the Impactful actions of the Bullet Club have made both the long-time faction and longtime up-and-down promotion relevant again. His match with Sabin was fire, unsurprisingly. But Switchblade losing his first match on Impact on this night was definitely not a given! The man he had a banger with over on Lonestar Shootout, Speedball Mike Bailey, had a 4-4.25-star clinic himself with Shelley — highlighted by a springboard moonsault to the floor and a twirling shooting star. Find these matches if you can! 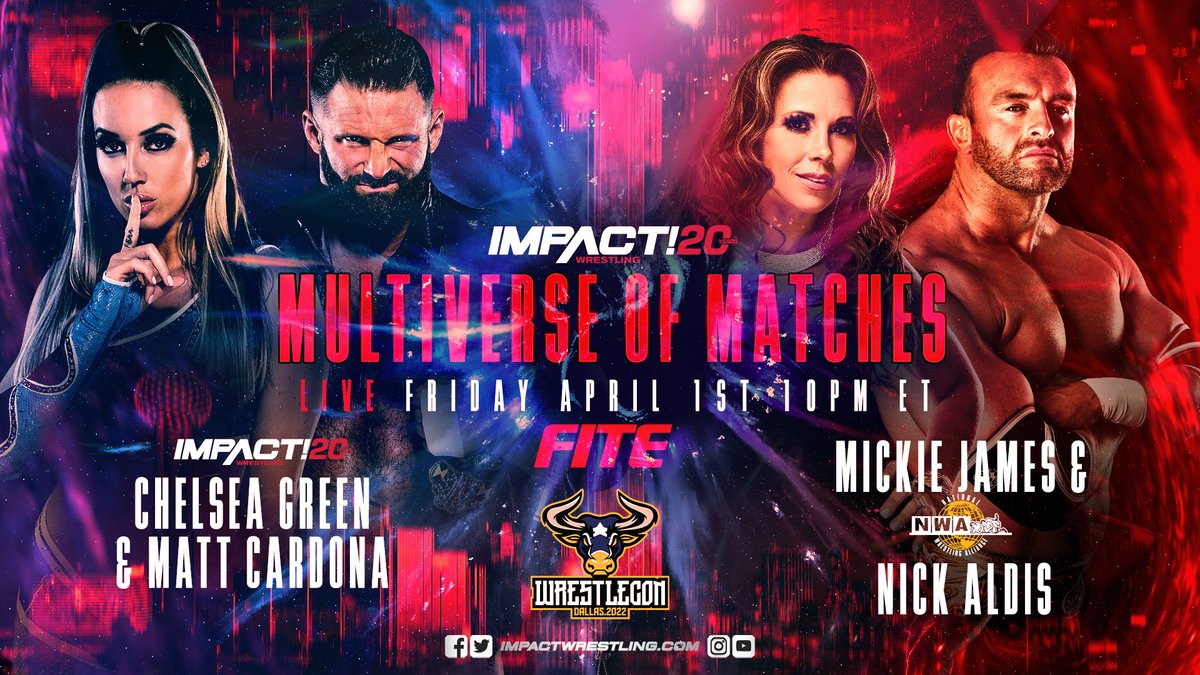 –Ultimate X Match. This was almost as anticlimactic as Roman vs. Brock. While not bad by any means, it’s definitely one many Mania Weekend goers had circled on their calendar. With talent like eventual winner Trey Miguel, hot free agent Blake Christian, Bullet Club’s Chris Bey, not that Virgil Vincent, the bomb Rich Swann, and Jordynne Fucking Grace, I was expecting nothing less than a 4-star smash. Didn’t happen. Seemed too sudden. Maybe there were too many matches in this.. Multiverse that prevented the X from reaching its proper peak. – 3/5

–Husband & Wife vs. Husband & Wife – Dirty Dishes at the Morrison household this was not. As much as I adore my evil twin — and the greatest heel in the business today — Matt Cardona and his lovely hot-mess bride Chelsea Green, this never reached the HYPE. Sad since their opponents, the legendary Mickie James and NWA’s Nick Aldis are just as great. Maybe they instead should’ve opted for a double date. – 2.25/5 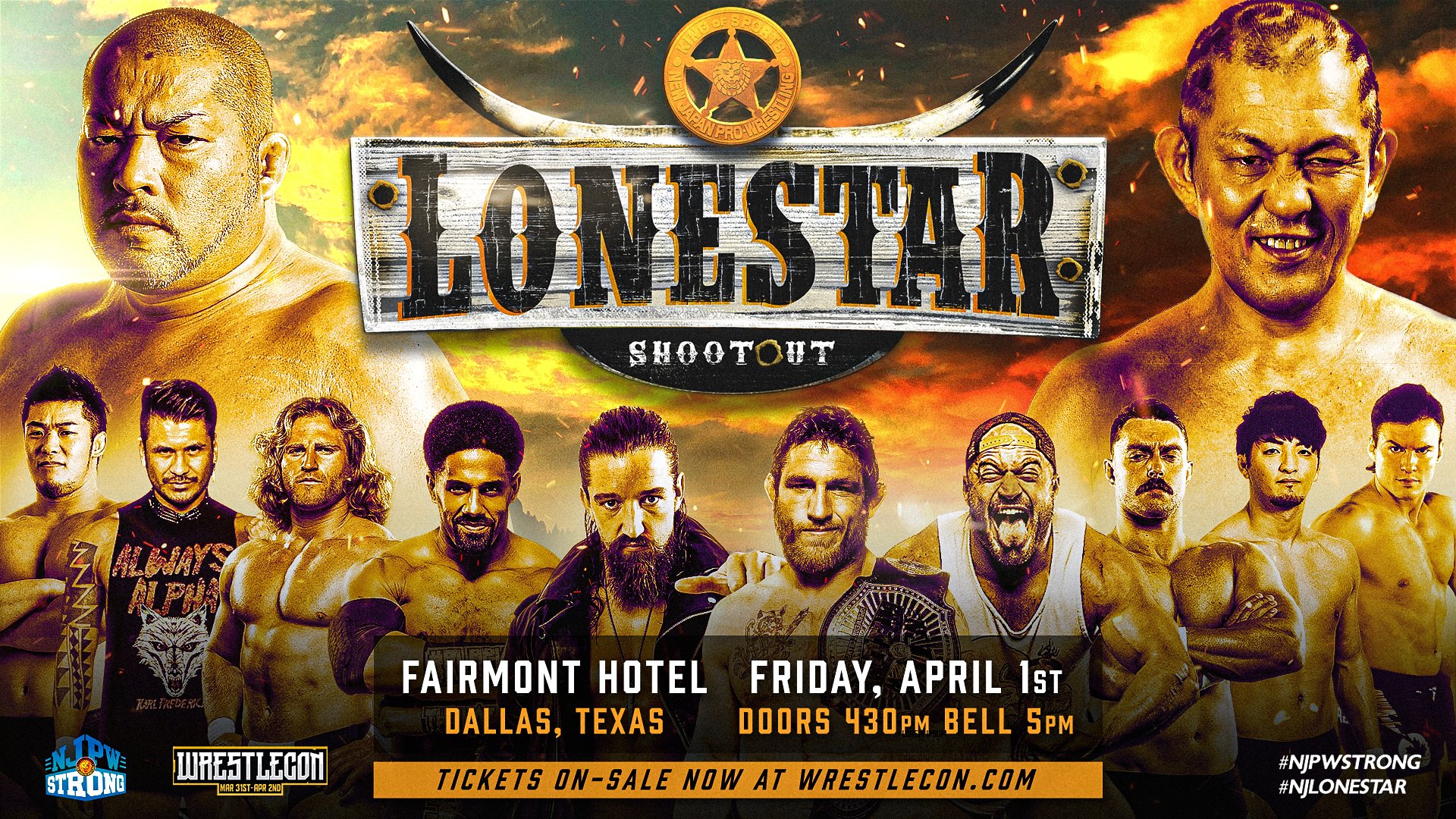 –Consistency and time. This show had arguably the most consistent wrestling of any show this weekend, and took more or less half the time! I feel like most events this past weekend (especially that of the “indie” type) needed to shave an hour. This one did and the five matches (yes, not 11, Josh Barnett!) felt like a smooth ride- especially when we have 3700 other shows to catch, including those near 11-hours of WWE content. Thank you, New Japan!

-Speedball Mike Bailey vs. Jay White – As mentioned prior, these two killed it on Impact and Bailey in particular had killed it everywhere else. As much as Suzuki made a presence this weekend on numerous shows, Bailey’s workrate remained supreme no matter the opponent and he also had nearly twice as many matches (9!) with many more high-spots. Incredible. And to think this awesome battle was only his 3rd or 4th best effort of the bunch. Also, lest we not forget White whose latest babyface Bullet Club thang is interesting AF; he’s more or less carried the weight of this promotion ever since re-calling America home. – 4/5 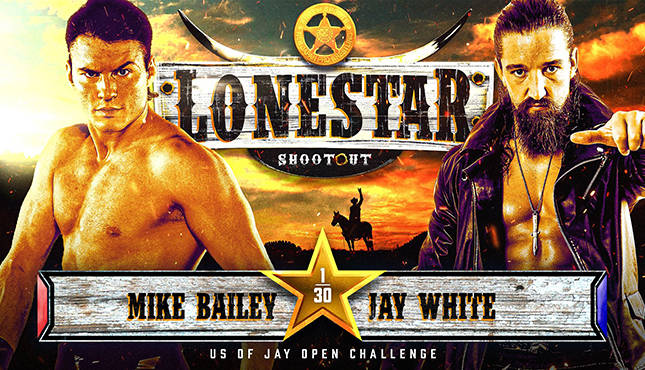 -The obvious: lack of big time international stars like Naito, Okada and Tanahashi. But this isn’t really a complaint since NJPW has the word “Strong” behind it in the title in reference to its sister U.S. brand, and, really, we had the aforementioned White and Suzuki, and Tomohiro Ishii (who had a very strong main event with Chris Dickinson). Throw in Narita, Rocky, Juice, and a surprise promo from Mox (!!) and this was a very strong extended episode of NJPW Strong. 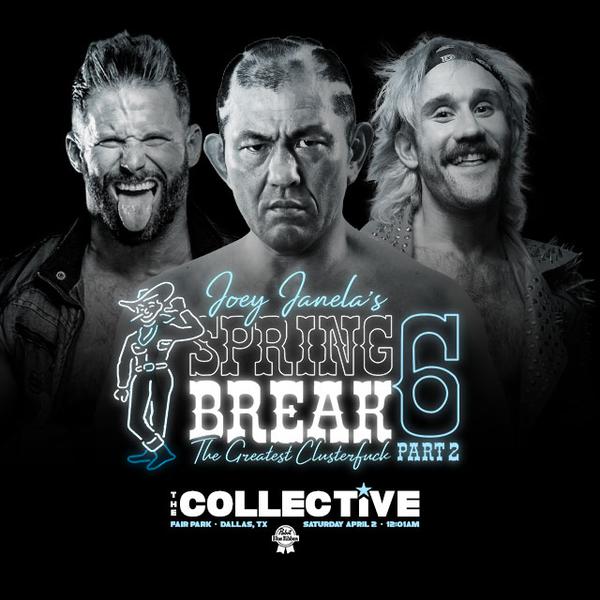 –The Greatest Clusterfuck and The Return of the Invisible Man. In my Night 1 WrestleMania Weekend review, I pointed out the lack of humor in Spring Break‘s Part 1. Well, not on this night. While this “Greatest” Clusterfuck was nowhere the greatest, it did return what made this event so must-see in the first place: the zany, wacky surprise entrants. Buff Bagwell (in crutches), Invisible Man (I laughed at ANYTHING & EVERYTHING involving the infamous legend), Maven (who basically called it a night after dropkicking everyone in the ring), Josh Barnett (who thankfully wiped the mat with that dirtsheet annoyance Sean Ross Sapp), Jimmy Wang Yang (and his super hot daughter Jazzy) and Early Morning Guy Steel (my personal fan favorite!) gave the SB brand the one thing Night 1 lacked.

–Tony Deppen vs. Biff Busick – Feel bad for Biff, who made a valiant return to the indie scene this past weekend only to get jobbed out in every major match. This was a hard-hitting affair, maybe Deppen’s best match in a minute as he also hit the crowd with a tenacious promo after. Let’s see where this all goes for “The Gatekeeper” – 4/5

–Minoru Suzuki vs. Effy – Another fun one, maybe the zaniest match-up of match-ups all weekend– and yet one that was actually watchable from a quality match stand-point. Imagine the scariest man in professional wrestling versus the gayest. Yup. Classic. – 10/5 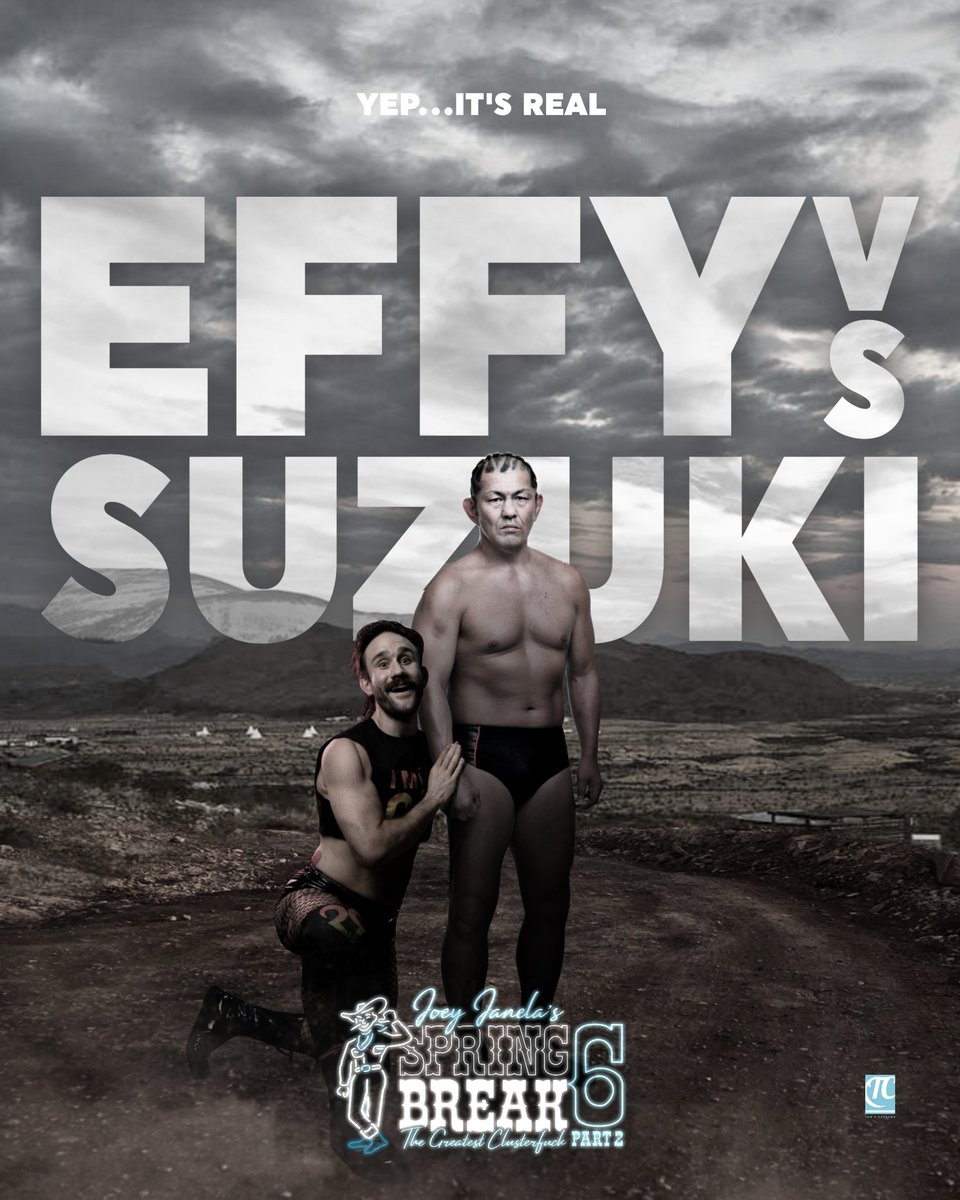 –The Greatest Clusterfuck and The Factions That [Almost] Killed It. Just me, or did almost every single WrestleMania Weekend event (including both nights of WrestleMania) finish ever so anticlimactically? This return of the wildest randomly generated and segmented “Royal Rumble” in the land was so much fun for its massive first half.. which mostly consisted of Joey Janela being a dick and eliminating every one by one. It was hilarious. Once the thing turned into a giant Cluster, it got Fucked. But I guess that’s the point. I’m happy for the humor, the surprises (some of whom we did see earlier in the weekend…), and the creativity, but the 1000 no-name bums and death match dudes hitting the ring late in the royal leveled this one down. – 3/5

–Nuttin’ else bad but the Bad Boy. Night 2 > Night 1, even if barely. The first half of the main event was super fun and hilarious, and the other 4 matches were all good-to-great in their own special way.