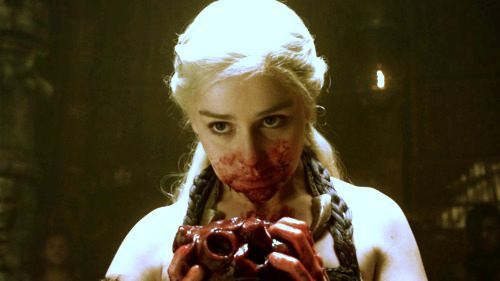 Alas, brothers and sisters.  This week, I am sorry to report, I shall make no confession.

Blame my piety on the emotional turmoil of having completed Dance with Dragons and, not only have to change my carefully crafted bio (I’m getting to it!), but also being faced with a literary void in my life that, for the past two years, was filled with A Song of Ice and Fire.  What do I do now?  How can I possibly read a different series when I am so thoroughly, emotionally invested in the future of Jon Snow?  I need closure before I can just forget him entirely, move on, and lavish my attentions upon another semi-scorned bastard turned badass with an animal sidekick of mythic proportions.

And don’t even get me started on the immense sympathy I have for the plight of Daenerys Targaryen.  Like we’re pretty much the same person, except my brother isn’t an insane person who traded my virginity for an army of semi-barbaric horse-lords.  He also never had any illusions of reclaiming the throne of Westeros and wasn’t  killed by having molten gold poured over his head in a sick similitude of a coronation.  And I didn’t magically hatch three dragons by walking into my husbands funeral pyre.

But the real reason behind me, let’s be honest, slacking off this week is that I have been occupied with other professional pursuits.  I am delighted to share with you all the inaugural installment of Fyffe Club a segment, written and hosted by yours truly, that is part of a new video game news show, entitled Hot Coffee on Egotastic! a division of BUZZMEDIA.

There are lots of women in varying states of undress all over the rest of the website, but the gaming section is significantly more modest.  For every one photo of a girl in her underwear there are at least four legitimate articles on gaming news.  This ratio is reflected in the show too, where the only hint of naked comes in the form of The Gamer Girl Diaries a segment featuring ladies, thus far all from Girls Gone Wild, stripping down to their skivvies and pretending to play video games.

Okay, so they actually are playing the games you see during the segment.  But the gameplay clips you’re seeing are not direct screen caps from their play session.

Here’s the link to the full show.

I would love to include a direct link to my segment, but alas, the direct link/embed code only seems to be working properly on facebook at the moment.  So, if you want to skip everything else and just feast your eyes and ears on this sassy sister, click on the “menu” icon in the corner of the video screen and drag your pointer across the thumbnails that appear until you find the segment entitled “Hot Coffee – 8/12/12 – Fyffe Club”, click away and there I will be.

Or, you could always check out the direct link on my super cool facebook fan page.  And while you’re there you could “like” me too.

One Reply to “Sister Emma’s Confessions: Or, lack thereof”