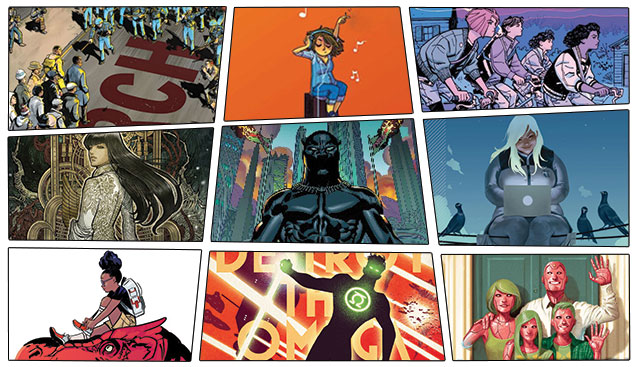 Eleven GHGers give their Top 5 Comics of the Year–ongoings and one-shots, indies and superheroes. Yeah. That’s a ton of funnypages, so let’s get to it!

(Feel free to click on the highlighted titles to read the reviews.)

1. Shade the Changing Girl (Young Animal/DC Comics) – “Nearly every single panel could be framed and hung in any modern art gallery.” – 4.75/5

2. Batman #44 (DC) – An instant classic, exploring Batman’s meaning to those on the peripheral of society, and how his “black/white” philosophy is more complex than he at first believes. – 4.25/5

3. Moon Knight (Marvel Comics) – A fascinating reintroduction to this C-list hero, while diving deep into the confusion of mental illness. – 3.5/5

4. DC Universe Rebirth #1 (DC) – An emotional reintroduction to the DC Universe that returns it to its hopeful, emotional core…while weaving in one of the Vertigo line’s biggest titles. A wildly well-written event from superstar Geoff Johns worth rereading…and not just for the action; but for the tone, and potential. – 3.5/5

5. American Monster (AfterShock Comics) – “Once the story is able to settle down and focus on something other than introducing characters, this title had immediate potential and grabbed my interest.” – 3/5

1. Old Man Logan (Marvel Comics) – What can I–or anyone, for that matter–say, but, oh, how we’ve dearly missed the Wolverine/Logan character kicking ass and growling perfect one-liners in the Marvel Universe. Thankfully, Jeff Lemire‘s Old Man Logan stretches that itch quite nicely. – 4.5/5

1. Animosity (AfterShock Comics) – Yes, The Wu is AfterShock Comics’ Social Media Coordinator, but I am also an animal and comic book fan. I had to put this comic on the top of my list; it will horrify you, fill you laughter, and make you choke back the tears. There’s a reason why it was on its 4th reprinting within the 4th week of its release. – 5/5

2. A.D: After Death (Image Comics) – A haunting new series from longtime pals, Scott Snyder and Lemire, that will make you think about everything. How would you act or see things if death was no longer a concern? Definitely a great topic to discuss sober, even if better under the influence. – 5/5

3. Faith (Valiant Comics) – This comic certainly reshapes the image of heroism; no longer for the super hot in comic books, it’s kindness and bravery, here, that comes in all forms. – 5/5

4. Black Panther (Marvel Comics) – T-Challa is reborn in this new series. Fans get to see a vulnerable side of Black Panther as he examines the conflicts of his nation. Ta-Nehisi Coates, a first time comic book writer, and art stalwart Brian Stelfreeze certainly rose to the occasion. – 4.5/5

5. Wonder Woman (DC Comics) – One time, someone said, “Ask someone off the street if they know who Wonder Woman is. They will tell you ‘Yes,’ but they won’t be able to tell you in detail a single story where she is the main character without the Justice League.” No longer the case for this high-profile superhero, with this new series from Greg Rucka, Nicola Scott and Liam Sharp–and, of course, the Wondrous depiction of Gal Gadot. – 4/5

1. Mockingbird (Marvel Comics) – “A refreshing work of light-hearted intensity that will tickle your neurons and question your health coverage.” – 5/5

2. Batman #50 (DC Comics) – “The action animation is amazing; the shift in intensity from one battle to another is as significant as the shifts in tone and color palate.” – 5/5

3. Green Lanterns: Rebirth #1 (DC) – “Like a musical sharpshooter, writers Johns and Sam Humphries hit every beat exactly where they need to be struck.” – 4.75/5

4. Dept. H (Dark Horse Comics) – “Like a metaphorical child between Agatha Christie and Jules Verne that looks like Bill Plimpton, the plot devices and development of the protagonist hit every beat like John Bonham on ‘Moby Dick’.” – 4.5/5

1. A&A: The Adventures of Archer & Armstrong (Valiant Comics) – “Without a hint of exaggeration, I can assure you that buying this comic book will essentially be the best decision you’ve ever made.” – 5/5

2.*TIE* Faith (Valiant) /// 4001 A.D. (Valiant) – “Irrepressibly post-modern and filled with self-referential humor, pop-culture lambasting, and delightful cliches, Faith is one of the most fun comics on the stands; while, with 4001 A.D., Valiant fends off these challenges with the wildest, most imaginative story and art.” – 5/5

3. Generation Zero (Valiant) – “The tense introductory story builds with a foreboding sense of mystery, and then delivers on the action in splashy panels filled with comic-y violence.” – 5/5

5. Think Tank: Creative Destruction (Top Cow Productions) – I’ve no idea how I’ve missed this: Think Tank is excellent, and worth reading, especially if you’ve never read this series before. – 4/5

3. Mighty Morphin Power Rangers (BOOM! Studios) – Reading the MMPR from Boom was akin to being brought back to 8-years old and reliving my favorite parts of childhood–but with the knowledge and foresight of adulthood. – 4.25/5

4. Cry Havoc (Image) – “This type of progressive movement in comics is always welcome and reassuring.” – 4/5

5. Nightwing (DC Comics) – “Tim Seeley greatly captures the sarcastic little brat that Nightwing is and always seemingly has been, while Javier Fernandez‘ linework helps give the comic that dark, gritty Gotham feel.” – 3.75/5

1. Locke & Key: Small World #1 (IDW Publishing) – Joe Hill, Gabriel Rodriguez & Jay Fotos return with a flashback ish that introduces not only a new key but an entire new generation of Lockes. The synergy between this creative team remains peaking at an all-time high as they put these Locke ancestors through their paces with Rodriguez’s incorporation of perspective and recursion a particular stand-out. The best news? Small World is a new beginning that will soon usher in a second volume of this beloved and horrifying series. – 5/5

2. Superman (DC Comics) –  “Successful, because it puts character first. There aren’t antagonists to punch, and we don’t even notice; it’s so interesting to see the Kents bounce off of one another in their new situation.” – 5/5

3. House of Penance (Dark Horse Comics) – Like the eponymous house, this series promis”es to be a maze that both puzzles and mystifies the reader.” – 5/5

4. Old Man Logan (Marvel Comics) – “We have a man who’s not trying to suppress the animal within but instead is embracing it for the noblest of reasons: saving the lives of everyone he loves.” – 4.5/5

5. Gotham Academy: Second Semester (DC) – “All Maps has to go is hop out of the car and bellow a single proclamation to make us realize how badly we’ve all missed her.” – 4/5

1. Empress (Marvel Comics/Icon) – Literally leapfrogging everything else I read this year.. is the sci-fi action adventure space epic from Mark Millar, Stuart Immonen & Wade VonGrawbadger! Six issues arrived on time and delivered month after month after month. When tasked to compile this list, I quickly came up with 40 titles–Empress was, and still, at the top of that list. – 5/5

2. Trinity (DC Comics) – “Francis Manapul does triple duty here–writing, drawing and coloring this beautiful book–and does not miss a beat, harking back to the style he ushered in his Superboy run: inventive double page spreads, soft tones and hard hitting action.” – 5/5

1. Patience (Fantagraphics) – Daniel Clowes‘ longest comic to date is also a first full-on scifi story of the weird and quirky. Clowes’ fans will instantly welcome the visual style of his familiar linework and flat colors that induce artistic nostalgia. – 4.75/5

2. Civil War II: Gods of War (Marvel) – “Marvel’s jumped the shark again and speargunned it into inedible sushi tidbits that even a fecal-fiending Plecostomus would undoubtedly upchuck as nothing more than innocuous chum bucket sludge…” – 2.5/5

3. M.A.S.K. (IDW Publishing) – “Would you like to suck the stripes off another saccharine-filled holiday log, based upon a kids-toy-cartoon-and-comic-book brand that was most likely born before you were???” – 2.5/5

5. Stargate Atlantis: Back To Pegasus (American Mythology) – “If you do happen to be a Stargaper, you’re better off daubing your slimy Starfish with this rag while you watch reruns of the actual TV show on the Sci Fi Channel that it originally aired on.” – 1/5

Dishonorable mention: Any 2016 Marvel title that’s been rebooted, retooted, or born still again, for a 2nd, 3rd, or 4th time, and beyond…

1. The Flintstones (DC Comics) – No way. Being a big fan of Space Ghost in the 80s, I figured Future Quest would be the winner of the DC/Hanna-Barbera Rebirth sweepstakes. Parker’s lovely little series was close. But when the satirist of “God Is Disappointed in You”–naturally–pens everyone’s fav cartoon not named Tom & Jerry or Scooby Doo (another surprisingly solid DC/HB mash-up), it shouldn’t be any surprise that Mark Russell gives us the much-needed old school Fred & Wilma romance in a year of bullshit tragedy and political strife. Not that any of those topics flee the Flintstones either; it’s just set in a world where Steve Pugh‘s paintery impressions showcase a pre-tech innocence that conquers over all. – 5/5

2. *TIE* Action Comics /// Superman (DC) – I enjoyed both “Superman” series for various reasons; pre-and-post Rebirth with Dan Jurgens‘ renaissance (Luthor is Supes! Sorta!), and Peter Tomasi‘s fluffed-up family guy (Lois’ back, yo! But who dis “Superman”? ). Both Patrick’s (Zircher, Gleason) murdered on the sketches, too, offering wondrous spreads and plenty of action panels. Rejoice for Rebirth: the DCU’s most important figure has finally arrived. – 4.75/5

3. The Sheriff of Babylon (Vertigo) – The most critically acclaimed of my Top 5 choices is deserving of every honor it’s been given. A shitfire personal and haunting war story from real life vet Tom King that practically gave him the job for Batman. OK, well maybe The Vision did that. Either way, in addition to digging more into the only bright spot in that last Avengers movie (and his even more sinister synthetic family), King got us readers to learn about the Iraq War behind frontline media–in the most entertaining print format possible. – 4.5/5

4. Bloodshot: Reborn (Valiant Comics) – A cyborg Punisher with a pencil figure conscience. This maxi-series also had the most badass art on the planet, and a most-shocking gaga story to fit along with all that blood and violence to boot. Let me tell ya: Jeff Lemire had a year. – 4.5/5

5. Paper Girls (Image Comics) – One of my favorite debut comics from 2015 had an even stronger 2016. It also accomplished the impossible: Paper Girls overthrew Saga as BKV‘s hottest comic. I can’t believe I just said that; but you won’t believe your eyes when you read it–especially if you love retro video games, Stranger Things, neon color pallettes… You know: the 80s. – 4.25/5 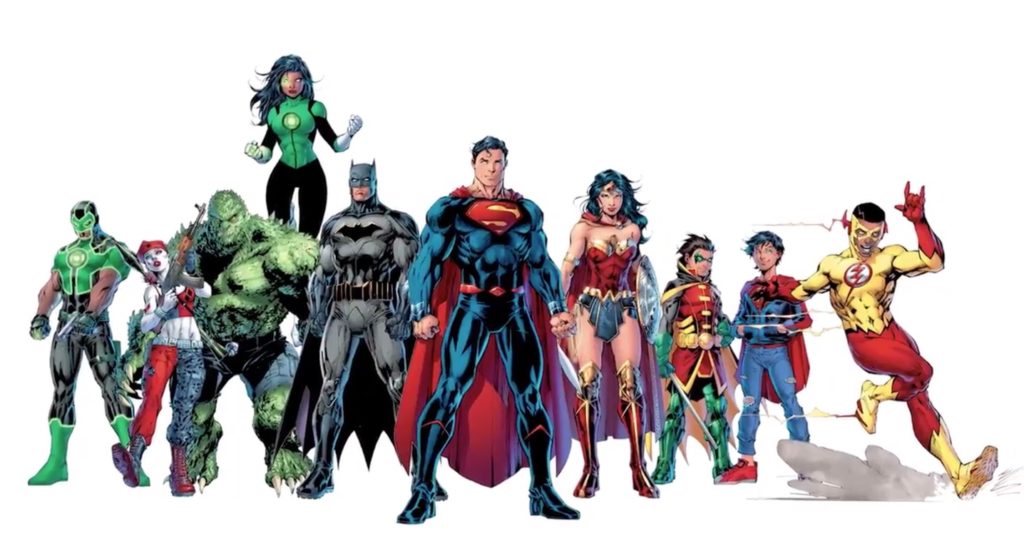